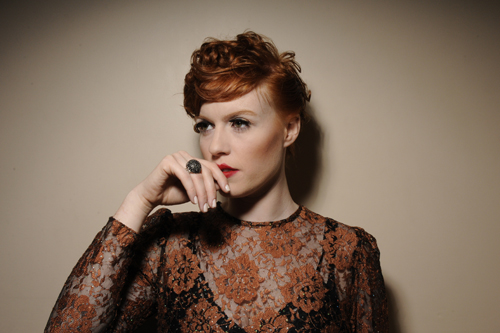 Watch out Nashville, Anna Haas is not to be underestimated. I had the good fortune to spend Good Friday night catching her early set at The Basement and it was good, indeed. Anna, like many artists living in the internet age with instant access to a wide-range of diverse influences and crowd-funded enterprises (Kickstarter helped make her first record happen), defies simple classification. She calls her sound “indie soul rock” and for our purposes, we’ll see that and raise it with “uniquely authentic with a penchant for the piano and a flair for the theatrical” (she’s a triple threat – I submit her video for “Maypole” into evidence). While at times channeling Kimbra (particularly here), Candye Kane (circa Toughest Girl Alive), Monique Powell (of Save Ferris), with a little bit of a Tori Amos meets Amanda Palmer flavor, Anna remains always true to her own distinctive voice.

Her 10 song, self-penned set was soulful and celebratory, often sexy, and rather surprisingly sweet. After performing the 3 most admittedly vocally challenging songs of her catalog “Game Over,” “The Real New York,” and “Here I Go Again,” with fierce precision, she moved to the keyboard for “The Lightning and the Clock.” Her songs were twice enhanced with video projections, most effectively on the lovely “Find Your Home” which featured real family footage of Anna’s own grandmother spanning all the way back to the 1920s. This poignant nostalgia-reel presented images of a world that turned at a much slower pace and Anna’s expert editing captured the beautiful fullness of a life well-lived. Watching in 8mm milestones such as wedding dances and returns from war in addition to the quiet moments of a breezy afternoon on the boardwalk combined with Anna’s vocals proved to be an unexpectedly emotional moment for many in the audience. You can check out the footage paired with her song at BUST Magazine’s site where the video debuted.

Anna’s powerful onstage presence and vocal prowess is undeniable, her energy is contagious, and her honesty truly refreshing. Whatever “it” is, Anna’s got it. Perhaps what makes her so compelling is the specificity of her song-writing. Anna spans an impressive spectrum of emotions with her work, the seductive “After Hours” was especially sultry and the spirited kiss-off anthem “Damn Right” was particularly relatable for anyone who has ever tried to stay friends with a former flame. She closed her set with the heartbreaking “A Thousand Lifetimes” and the vivid details of her lyrics made it impossible not to be moved as she memorialized a loved one lost. I found myself lamenting the lack of time for an encore and know I was not the only one left wanting more.

You can listen to Anna’s Crazy Is via the Spotify player below and get to know her better through the usual online outlets: Official Site | Twitter | Facebook | Youtube. Keep up with her show announcements here to make plans to catch her next time she’s playing around town!

Cristina Taddonio offered lovely BGVs on many of Anna’s songs as well as a strong opening set of her own material full of work with unusually narrative structure that would be right at home in a modern rock opera. You can familiarize yourself with her sound here.