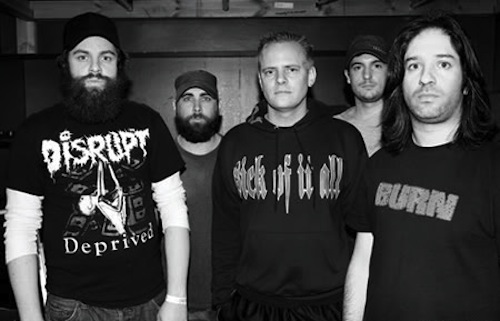 Save for guitarist/founding member Matt Fox and, for most of their existence, bassist (and sometimes guitarist and vocalist) Matt Fletcher, Shai Hulud‘s members have always been in a state of flux. Even now, the modern hardcore legends don’t even officially have a lead singer; they’re currently touring with a fill-in. For most bands, this would be a kiss of death, but Shai Hulud aren’t most bands.

Founded in 1995 when many of its members were still in high school, Shai Hulud’s influential run has been instrumental in shaping the modern hardcore, metalcore, and post-hardcore scene. While many of their peers have co-opted aspects of the sound to package it in a more mainstream accesible way, and, in doing so, have gained more fame and attention, Shai Hulud have always remained hardcore purists. It’s for that reason that they aren’t exactly a household name; in fact, they’re playing a relatively tiny, effectively DIY all-ages show tonight in Nashville at The Owl Farm. And they wouldn’t have it any other way.

The group’s latest album, Reach Beyond the Sun, was produced by New Found Glory guitarist Chad Gilbert. Fun fact: Chad originally fronted Shai Hulud back in ’96-’97, at only 14 years old. Though he’s not officially rejoining the band, Gilbert even sang lead vocals on Reach Beyond the Sun, marking his first collaboration with the group since their 1997 debut Hearts Once Nourished with Hope and Compassion. Not only does Gilbert rip in a way he that wasn’t even capable of back in the day, but also the album embodies a stronger, more focused, and immensely ferocious Shai Hulud that we haven’t seen in years.

Here’s the lyric video for new track “Human Falling” with Gilbert on vocals:

Shai Hulud has never been about the people in the band, so much as the music and message they represent. The band is a vessel, true champions of a hardcore scene that has too-often stumbled astray or morphed into something unworthy of its heritage. Rest assured, 18 years in, Shai Hulud are showing no signs of breaking what they’ve so passionately crafted. They’re a shining beacon in hardcore, a reminder that it’s a movement just as much as a musical style, and the closest thing you’re going to get to the experiencing the late ’80s/early ’90s golden age of real hardcore. Do yourself a favor and head to The Owl Farm tonight for a little piece of history!

Typical of this type of tour, Shai Hulud are joined by a ton of bands: Thy Will Be Done, Altars, Beyond the Shore, Latin For Truth, and Shade. You can preview the whole lineup and find more info here. Things kick off at 7:30PM (doors at 7PM), it’s all ages, and it’ll cost you $10 at the door.