If you’ve been keeping tabs, you’ll remember that back in January we reported on rumors of influential pop punk/pop rock band Fall Out Boy‘s plans to reunite. Shortly after, we were the first news source to announce the specific details and date of the band’s official reunion announcement. Along with that announcement, the band premiered a 2Chainz-starring video for “My Songs Know What You Did in the Dark (Light Em Up),” the first single from their upcoming album, Save Rock and Roll.

Fall Out Boy also announced a U.S. tour, which ends with a performance at Nashville’s own Ryman Auditorium. Unfortunately, that show sold out in a matter of minutes. But, rest assured, the band is back for good and plans to keep touring indefinitely, so another nearby show is an inevitability.

In recent weeks, more specific information has leaked about the Butch Walker-produced Save Rock and Roll, including its iconic cover art, and guest appearances by Elton John (who apparently helped name the record) and Courtney Love, among others. Late last night, the band finally released the album’s tracklisting, debuted their new single “The Phoenix” along with its official video (the second chapter in an apparent 11 part saga), and launched an iTunes pre-order which is only $7.99 for a limited time.

“The Phoenix” continues the band’s shift to the more pop rock, electronic-infused sound set by “My Songs Know What You Did in the Dark (Light Em Up).” Singer Patrick Strump, especially, is delivering at a level of confidence and ferocity above and beyond anything Fall Out Boy has previously released. Though this stylistic shift might be polarizing to some fans, it’s a continuation of an evolutionary path the band has been on for years, and makes perfect sense within the context of their career. Bassist/creative mastermind Pete Wentz released a statement on his blog earlier this morning, addressing some fans’ criticism of the band’s new sound, and their desire to progress rather than artificially recreate their previous output.

You can check out ‘Save Rock and Roll’s cover art and tracklisting below: 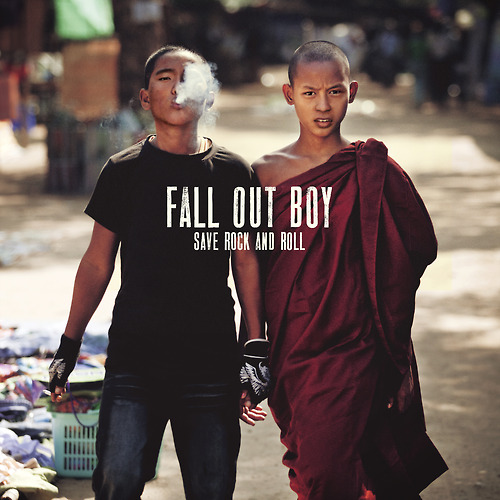