We’ve already established that there’s a lot going on tonight in Nashville. There’s one more show I wanted to tell you about, however, and it’s one you might otherwise overlook. Singer/actress Alexz Johnson is returning to 12th & Porter with Charlene Kaye, Jay Stolar, and Misty Boyce and it’s sure to be a fantastic time! 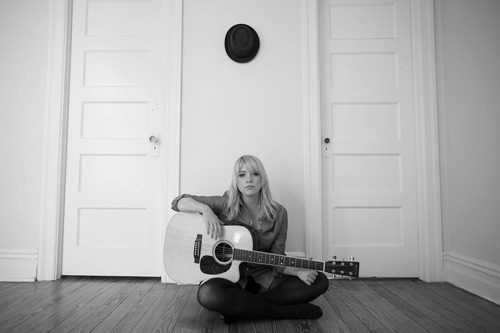 If you only know Alexz from her starring role on popular Canadian teen show Instant Star (or, if you were a Disney kid in the late ’90s like me, you might remember her from So Weird), you’d probably assume she transitioned into a more traditional, poppy, label-backed career. You’d also be totally wrong. After the break, find out how Alexz became the poster-child for crowd-funded touring and a true independent music success story. Also, preview her retro-influenced indie pop.

Residing in Brooklyn by way of Canada, 26-year-old Alexz Johnson has certainly experienced just about every facet of the industry in just a few short years. Coasting on her near decade of acting success, she did, initially, try to go the way of the successful teen star and sign to a major label. Unfortunately for Ms. Johnson, her foray into the label system took place during one of the most financially uncertain periods in music history, and label changes forced her record to be shelved- twice. Frustrated at this side of the industry, but determined to take matters into her own hands, Johnson put out her indie debut in 2010, called Voodoo. The indie music scene proved not all it was cracked up to be either, and, completely taking the reigns on her career, Alexz made the trek to Nashville to record an EP, Skipping Stone, with basically no budget.

Label-less, self-sufficient, and with a great EP that deserved to be performed in front of people, Johnson made the decision to run a Kickstarter campaign to subsidize the cost of a tour. The result was more positive than she ever could have imagined: her $30,000 goal was more than doubled, netting the singer around $70,000 to pay for her first solo tour. After the overwhelming response to this campaign, and an intimate and well-documented tour which allowed her to connect with fans very personally, Alexz has once-again turned to crowd-funding. This time it’s for her new album, and you can donate right now on her Pledge Music page. As with all crowd-funding sites, there are prizes for different donation levels, and Alexz’s offering are especially generous compared to most.

Johnson has played the part of the pop star on television, but her solo music is far from it- she’s got way too much substance to subscribe to that scene. She’s clearly an old soul, harkening back to influences in classic rock, soul music, and jazz. Her music lands somewhere in the territory of indie pop for the most part, with tasteful and melodic instrumentation. She has a beautiful voice, and an amazing amount of soul behind it- delivering every emotion in such a convincing and meaningful way. Her latest EP was such a sonic leap from her debut album, that it’s almost inevitable that her next album will be another major display of artistic growth. She’s a refreshing gem in a scene where so many people in her position would have taken the easier route, and a true testament to what can be achieved independently when you work hard, meaningfully connect with your fans, and, most importantly, make great music. I wish more musicians possessed her work ethic and, if her music wasn’t enough to sell you on the show, I hope her story helps. Don’t miss your chance to catch Alexz this evening!

Alexz Johnson is performing at 12th & Porter tonight with support from Charlene Kaye, Jay Stolar, and Misty Boyce. The show starts at 9PM (doors at 8), it’s 18+, and you can still grab tickets here.