This week is a bit out of control for new releases. I tried my hardest to narrow them down, but there are just too many great new records to fit into one post, so I’m splitting it into two. I’ll give you five records each day (and a couple of bonus picks). The second part will go up tomorrow (so if you don’t see your favorite new album on here don’t leave me hate comments; yet). Quick Take: This is my essential pick for the week. It’s perhaps not my hands-down favorite new album (but it’s pretty close, there’s just a TON of competition), but it’s the one I want to highlight the most. Since their fantastic debut, The Man with Wooden Legs, in 2009, From Indian Lakes have toured and worked tirelessly to grow their fans in a very organic, DIY fashion (both albums are self-released). Able Bodies takes the templete of their debut record and perfects it. The band plays a lush, sometimes agressive, brand of indie rock and with their new album they further broaden their attention to detail and melodic sensibilities, with intelligent lyrical versatility from frontman Joey Vannucchi. Able Bodies is a huge leap forward for the already talented band and we sincerely hope it earns them the broader attention they deserve! I caught them at the Exit/In over the summer and I can personally attest to the fact that their live show is just as fantastic as their album.

Check Out: “Stay Outside,” a layered, driving track that serves as a great demonstration of the groups’s fantastic aesthetic choices on Able Bodies, as well as tasteful instrumentation and dynamic range. Quick Take: Available as both a standalone EP and as a rerelease expansion to her 2011 debut (well, debut under this name anyway) Born to Die, Paradise proves that, love her or hate her, Lana Del Rey has more tricks up her sleeve than just “Video Games.” At 8 songs, Paradise feels like the album Born to Die should have been. It’s not a stylistic departure, it’s more of a refocussing. Present still are the orchestral sweeps, the thematic juxtaposition of street attitude and privileged upbringing, and Del Rey’s gorgeous, drawn out vocal style. If there was any doubt to her technical skill, Paradise should put it to rest. The singer’s delivery is infinitely more confident, perhaps a result of honing in on what worked on her debut and ditching what didn’t. Some of the same flaws exist, such as lyrics at times coming across as pretentious or overindulgent, but the quality of this outing overshadows them. Fans will love it and Paradise might just be strong enough to win over listeners who wrote off Lana Del Rey the first time around.

Check Out: “Cola,” though it comes across as taking itself a bit too seriously in some of its lyrical delivery, proves Del Rey can aesthetically co-opt what worked on “Video Games” but delivery it a different and equally as enjoyable package. Her vocal delivery is much, much stronger here too. Quick Take: Blake Schwarzenbach is back you guys. Blake. Schwarzenbach. Is. Back. Though the founding father of emo has spent the last 10 years occasionally dabbling in music, his time has primarily been occupied by teaching, bartending, activism, literary writing, and, randomly, going by the pseudonym Christopher Lager. If Lager is the man Schwarzenbach spent the last 10 years as, however, Lager has finally given way to the return of the Schwarzenbach we once knew. With their debut full length (following a brief and under-supported EP in 2010) from his new band forgetters, here’s the awesome news: it’s more Jawbreaker than Jets to Brazil. The angst is back, the songs lean heavier, and Schwarzenbach growls with an intensity he hasn’t shown in years. That’s not to say forgetters is the second coming of Jawbreaker, the pacing and tonality of Jets to Brazil is definitely present and the frontman has evolved a lot in his approach (especially in his attention to lyrical detail). However, the raw, earnest intensity and seriously old school production choices will make you want to bust out that old Promise Ring t-shirt, dance in a basement with all your friends, and pretend like the golden age of emo never ended.

Check Out: “I’m Not Immune” and, if you’re a Jawbreaker fan, I dare you not to get chills. How to Destroy Angels- An Omen [EP] [Columbia]

Quick Take: Let’s take a trip way, way back to the year 2007: the music industry was in shambles, monetized streaming was still largely a pipe dream, a little band called Radiohead tested out, to huge success, a “pay want you want” model for a self-release, and disenfranchised major label artist named Trent Reznor, sick of the label system and lashing out against the old industry model, finally became a musical free agent. Reznor then proceeded to perfect a direct-to-fan sales model for his band Nine Inch Nails to huge success and proved (provided you already have the fanbase to sustain it), a global touring entity could exist as a completely independent band. Fast-forward to now: Nine Inch Nails is on hiatus, Reznor is now an Oscar winner for his work on The Girl with the Dragon Tattoo soundtrack, and, perhaps most shockingly of all, Trent Reznor has a new major label release out. The second EP from his new project How to Destroy Angels (which includes Reznor’s wife and vocalist Mariqueen Maandig and Dragon Tattoo collaborator Atticus Ross) is everything you’d expect from Reznor: industrial, brooding, rhythmic, and a slow burn. It’s also the best thing he’s been involved in in years.

Check Out: “Keep It Together,” the angst-ridden, pulsing, and slightly creepy intro which features great back and forth vocals between Reznor and Maandig. Quick Take: Given the fact the Clinic have reliably released an album every two years since 2000, you’d think that by now they’d be easier to pin down. They’re a little bit art-rock, a little bit pop, and a little bit psychedelic with a 70’s aesthetic and a distinctly modern experimental backbone thrown in for good measure. You’d also think that they’d have lost some artistic traction, or at least would sound a bit tired by now; they haven’t and they don’t. Free Reign is a very sold and enjoyable outing that is both instantly listenable and pleasant while remaining dense and adventerous. I particularly enjoy the blend of vintage instruments with very modern textures and structure. The band has fallen into a pattern of advancing their songwriting without much venturing past their established stylistic realm, which keeps their releases enjoyable, if not predictable. My one gripe, perhaps, is I’d like to see a slightly more adventerous side of Clinic at this point in their career. But, on the other hand, if it ain’t broke…

Check Out: “Miss You,” a very lush and groove-laden track with great, layered instrumentation smart, catchy hooks. It’s definitely one of the record’s finest moments. BONUS: Gifts from Enola- A Healthy Fear [The Mylene Sheath]

Why: Disclosure: these guys came of out my hometown scene so I witnessed their journey from basement band to nationally buzzed-about post-rock heavyweights firsthand. Nonetheless, they’re still a fantastic, visceral, and experimental foce to be reckoned with. A Healthy Fear is their most adventerous release yet. Check out heavy, mathy track “Robespierre” and stream the entire album on Spotify. Why: The debut album from this poppy English post-rock band has no business being SO good. Intelligently written, melodically brilliant, laden with soaring hooks, and powerful yet sensible, if this is what they’re capable of on a debut, I can’t wait to see how amazing their followup is going to be. Check out the synthy, edgy, earnest jam “All of the Streets of My Hometown” and stream the entire album on Spotify. 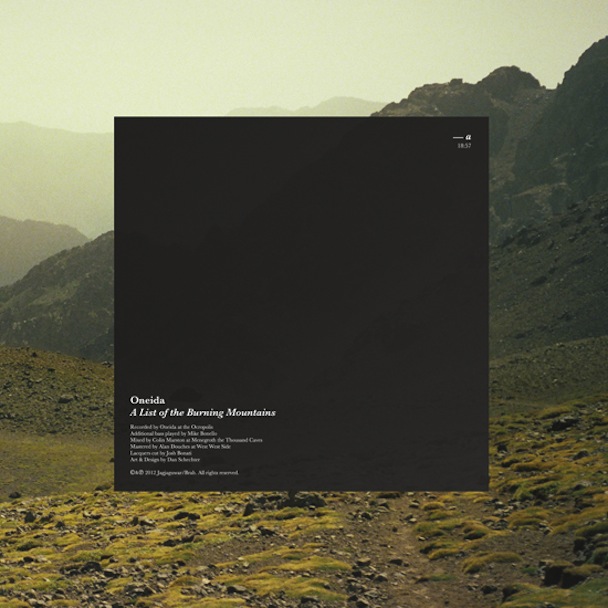 BONUS: Oneida- A List of the Burning Mountains [Jagjaguwar]

Why: Instrumental/noise rockers Oneida continue to do what they do best with their 12th album, A List of the Burning Mountains. As with many of their instrumental peers, the band has chosen to split this album into two sprawling epic tracks- simply “1” & “2” (I prefer “1”). Minimalist, yet layered and sonically intense, this is a strong outing that is sure to satisfy fans. Check out The more straightforward and dense “A List of the Burning Mountains 1” and stream the entire album on Spotify.