First off, for those of you that haven’t taken notice, we’ve grown!  So, please take the time to welcome Jessika and Philip to the mix.  If you haven’t taken notice, and just thought that Andrew and I had adopted numerous voices, then, well, sorry to disappoint.  In other news, it is Friday, and I need this Friday like a junkie needs a fix.  It’s a relatively light bill around here this weekend, but that doesn’t mean that you can’t enjoy some live music this weekend.  There are a few shows that we want to highlight, and we’ll have some more detailed posts coming through the weekend about later shows.  So, don’t slack off just because it is Friday, folks.  Get out and see some live music.

The Losers Lounge is a bimonthly tribute show that is based in New York City that pays homage to the pop music greats of the past.  Started 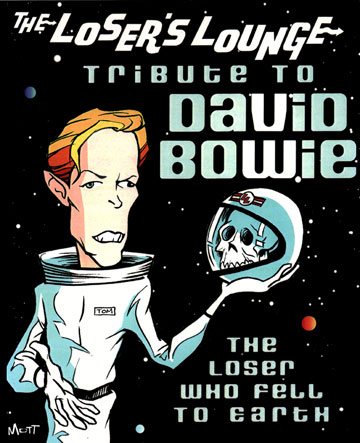 in 1993 by session keyboardist Joe McGinty (Psychedelic Furs, The Ramones, Ryan Adams) and psycho-cabaret singer Nick Danger in the Lower East Side’s Pink Pony Cafe, they’ve grown into a city-wide phenomena having performed over 300 tributes to over 50 artists.  Tonight, they bring the show on the road with a Tribute to David Bowie, and I would be surprised if there were not some special guests that stop in for this event.  Things get started over at Third & Lindsley around 9pm, and you can grab your tickets here.

If you need a bit more of a release than a Bowie tribute, not that I could imagine, you may want to swing down for a night of slightly more raucous covers with Take The Power Back.  (For some reason when I wrote that I had a sudden urge to see the movie Predator, I hope that isn’t chauvinistic in some way.)  Anyway, this is an all-girl cover band of everyone’s favorite finger-in-the-bosses-face-after-a-long-week-of-taking-corporate-shit Rage Against The Machine.  I can’t really figure out anyway that this couldn’t be a good time.  Things get started around 8pm with Tipper Whore and Hotel War over at Exit/In, and you can pick up some tickets here.

If you are feeling slightly more worldly, you could swing over to The End to check out Roots of a Rebellion‘s dubby grooves along with Shaggy Wanda, Montezuma Fire Machine, and Bear In The Campground.  You can hear a bit of RoaR’s dubby grooves below while buying your tickets here.

If none of this sounds fun, you can always head over to Big Kid’s Night at Nashville Children’s Theater, and get your drink on with the Peanuts Gang for their performance of You’re A Good Man, Charlie Brown.  You can grab tickets for that one here.

Andrew may be the biggest Weezer fan I know, and, as we speak, he’s penning the reason that you should be at The Stone Fox on Saturday for My So Called Band’s tribute to Weezer.  Is it tribute weekend around here or something?  That post will go up on Saturday, so stay on your toes.

We finally get back to some good local (well, at least, regional) rock ‘n roll with Bowling Green’s Schools & Heavy Chase along with Nashville’s Evan P. Donohue & Calicocat.  If you need some solid jamming ass rock music, this might be your best bet for the weekend.  You can check out Schools’ “Alien” (that gets me excited for East Nashville Underground!) below along with some highlights from the others, and you can grab your tickets here.

If you are still feeling that worldly beat, you should head over to 12th & Porter to revel in the upbeat zydeco dance tunes of Terrance Simeon and The Zydeco Experience.  You can check out a bit of my own personal tribute to the fair city of New Orleans with a live video of Terrance and Co at a former home-away-from-home, Tipitina’s.

We’ll have a write up later today from Jessika about the ever-infectious (that’s a good thing, right?) Regina Spektor at The Ryman.  So, stay tuned for that in a couple of hours, or you can just grab some tickets for it here.

If you need something to listen to right this second or don’t have the money for The Ryman, then you should consider The Basement on Sunday to check out Memphis’s Star and Micey and Nashville newcomers Carolina Story.  Star and Micey are probably best known around these parts as the band that clocked in at #1 on that Paste Magazine Tennessee Bands You Should Listen To Now piece they did back in June.  I think this might be their first venue stop in Nashville, and it is something that has intrigued me for quite a while now.  Carolina Story are some Nashville newcomers that might be right in line to pick up the slack from the disbanded Civil Wars.  You can have a sneak peak of both below, and grab your $5 tickets at the door.