It’s another fun weekend ahead here in Nashville.  So, get your magic 8 ball out, and start asking questions to decide which of these awesome shows you should get out for.

We’ve already told you about the Apple Road Rage on Saturday, and their kickoff party happening tonight at The Basement.  That’s a tough weekend plan to beat, but it’s surely not for everyone.  So, let’s run down the other shows that are going on this weekend in Nashville.

Probably the highlight for the local music fanatics will be the return of Skyblazer.  As part of Infinity Cat Record’s 10th 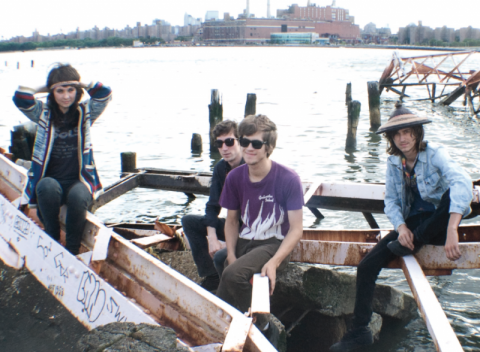 Anniversary, the founders and face of the label, JEFF The Brotherhood, will revisit their five year old psych-rock project Skyblazer with members Lindsay Powell (Cake Bake Betty, Fielded) and Brad Holland (Hell Beach, Whirlwind Heat).  Who knows if this will turn into a full time thing, but, I would say with the steady-out-of-this-atmosphere trajectory of JEFF (see the great Nashville Scene writeup & Letterman’s “Sixpack” below), it’s unlikely there will be tons of time for Skyblazer in the near future.  It might be another 5 years until you hear from them again.  You also have Psychic Hotline, Deluxin’, & Tristen on board, so that will round out the evening nicely.  Things get started over at Exit/In around 8pm, and tickets are 10 bones.

He’s My Brother, She’s My Sister is playing their third Nashville show this year (is that really right?).  They were at the Basement a while back, and then they opened for Edward Sharpe at The Ryman, right?  If you are a fan of that Ed Sharpe sound, then you will definitely want to give this some consideration.  There is a player below for HMBSMS.  You also have Golden Animals & Goodbye June getting things started.  Tickets are $10, and you can snag those here.

The GoldRoom, Parlour, The Ascent of Everest, Shedding and Old Baby are at the High Watt on Sunday night….

P.S. Save some energy for A Place To Bury Strangers on Monday.