It’s freaking summer time, and, as Jeff The Brotherhood would say, “It’s so, so, so, so, so, so, so, so hot.”  Might as well embrace it with some sultry nights around town this summer.  Specifically, I’m talking about two of the best summer events in the city…. Sounds Like Summer and Live On The Green. 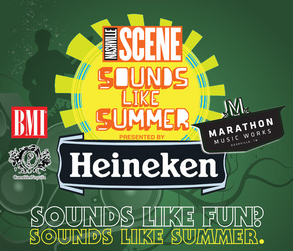 Sounds Like Summer gets started for their weekly gig over at Marathon starting with Guilty Pleasures on July 19th.  No offense to our Nashty brethren, but the following week (7/26) brings Guided By Voices!!!  I’ve never had the opportunity to pull an Adam Gold and wake up remembering my first GBV experience on a taco-bell regurgitated sofa, but I am pretty sure that means there is a decent chance you will have a kick-ass time.  The SLS series winds up with the solid lineup of Ledisi and Eric Benet on August 2nd.

You get a month to cure your heat exhaustion before Live On The Green begins.  We only know the headliner of the opening weekend for this one so far, and I can’t (from my New Orleans roots) be more excited about Mac Rebennack getting this one started.  You might know Mac better as Dr. John.  It’s odd that when I think of Dr. John now, I think about seeing him hanging out with Dan Auerbach before their Superjam a little over a year ago at Bonnaroo.  That visit to Nashville left us with the kick ass record, Locked Down, that was recorded at Auerbach’s Easy Eye Sound Studio.  I’m not saying there would be another Superjam in downtown Nashville, but I am telling you that The Black Keys are currently slated to be “Locked Down” in Nashville on September 6th during a month-long touring hiatus.

The full Live On The Green lineup comes out next week, and we’ll keep you updated.  You should just go ahead and mark the six Thursdays from September 6th through October 11th in your calendar.  Hell yeah, summer!

These United States, The Basement, Tonight In Nashville