Explosions In The Sky, The Ryman, Tonight In Nashville

When you hear the term post-rock who do you think of?  I guess that answer partly depends on your age.  If you are my age or a little older, this might include Don Caballero, Slint, or Tortoise.  If you are a little younger or remained a fan of post-rock, there is no way you made it through the past decade or so without hearing of Sigur Ros, Mogwai, or tonight’s performer… Explosions In The Sky. 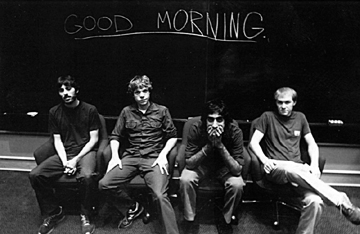 Explosion In The Sky hails from Austin, TX, and they have been putting together some of the most beautiful instrumental rock that I know of since 1999. Since then, they’ve thrown together six full lengths, including their 2011 release Take Care, Take Care, Take Care.  They’ve pretty much played at the top of the bill at almost any festival you can imagine including an inspired set last year at Bonnaroo (vid below).

So, go out and get your shoegazey, emo, post-rock on…  but remember, if you bump into these Texans around town and try to talk post-rock, it might be hard to convince them that you know what you are talking about.  Although the band’s music deviates from pop, Drummer Chris Hrasky said that they have similar goals “like immediately grabbing your attention and getting to your emotions.”  Munaf Rayani said, “We don’t consider ourselves post-rock at all; we consider ourselves a rock band.”  Sure guys, and U2 is Alt-Country, Wilco is Swedish Metal, & Jack White plays the Blues…. oh, wait.

Enough yapping, let’s get to some tunes.  Click here to check out some tracks over at Spotify.  Tickets are still available for this one (somehow), so get out and see some live music tonight.