It’s been 36 hours since MIA “flicked” the bird at the Superbowl, and now it is time to move on and talk about some local music happenings that matter.  It’s quite the double bill tonight at The End as The Black Belles team up with fuzz pop rockers Bleached for another awesome night out in Nashville.

We’ve talked quite a bit about the SXSW bound Black Belles who have been taking Nashville by storm since releasing their first record on Third Man Records last fall.  You can hand a little promotion credit to Jack White and the boys, but really these gals are a lot of fun to see live with their gothy witch vibe.  If you haven’t heard their self-titled debut LP released last year, do yourself a favor and check that out. 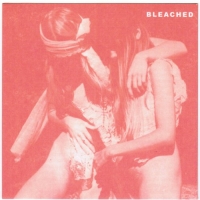 I am equally excited tonight to see Bleached.  This LA-based surf fuzz pop band is the rising phoenix for sisters Jessica and Jennifer Clavin after their punk-frenzy band Mika Miko faded into ashes.  I doubt you will get the full frenetic punk show that Mika Miko was famous for, but you are likely to get a fuzzy surf pop show with some very punk roots.  They’ve released a few 7-inchers to date titled Francis (via Ooga Booga, cover art above… I’m pretty sure they are looking at her hair?), Carter (via Art Fag), and Searching Through The Past (via Suicide Squeeze).  With the buzzy internet success that they have seen of late, not to mention the rise of the female, Ronettes-revival-Spector-pop phase that we are currently floating through, I’d say a full length has to be on the way.  Though, they might be a little busy at the moment, as they are in the middle of a 30-plus date US tour in support of bands like our own Black Belles, Smith Westerns (yeah, The Black Keys openers), Porcelain Raft, and Veronica Falls.  They will also be performing during SXSW this year with The Belles and several hundred other bands.

Tonight also includes an opening slot from Nashville’s Thelma and The Sleaze.  Tickets are a mere $8, and things get started, per usual, around 9 pm.  While you are waiting and/or working today, check out some vids from both The Black Belles and Bleached below (how alliterative).