Yesterday, we received news of the tragic accident to DJ Mr. Jonathan Toubin, and within minutes the Nashville community (as well as the country) had begun to respond.  Tonight, some local bands will be having a benefit concert for Jonathan Toubin at FOOBAR in Nashville (which is a fitting spot because Toubin was there rockin’ it out back in May).  Acts include: Turbo Fruits, Nikki Lane, The Ettes, Reno Bo, D. Watusi, and I doubt it will stop there. 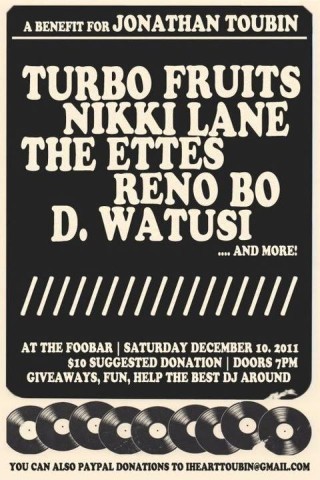 Jonathan Toubin is widely regarded in the DJ circuit, and is often considered one of the best in New York.  His diverse styles and innovative approaches (he used lots and lots of 45’s) quickly garnered him praise for creating atmospheres that everyone can groove to.  I’ve never had the opportunity to catch one of his parties, but I hear his name a lot from friends in the NY scene.

Here is what Jason Diamond of Impose Magazine said (in describing Toubin’s contribution to the New York City music and party scene).

Enter Jonathan Toubin, and his simple-yet-visionary approach to revamping the entire lanscape of New York and Brooklyn from midnight till the after hours…His meticulous approach has paid off quite handsomely as pretty much each and every party with the Jonathan Toubin stamp on it seems to be the biggest party going on for that given night.

Doors open around 7pm tonight, and there is a $10 suggested donation.  He is still in critical condition, so please give more if you can.  If you can’t make it tonight, a Paypal account ([email protected]) was set up so you can help.  You can send your love and follow along with the family at this facebook page.

Woods with R. Stevie Moore, The End, Tonight In Nashville