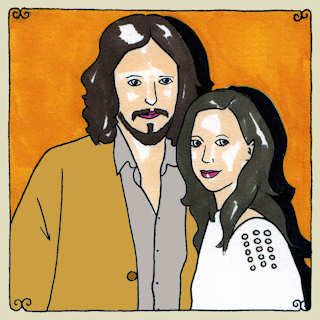 Singer/songwriters Joy Williams and John Paul White (dba The Civil Wars) met in Nashville in 2008, and the chemistry was immediate.  After their first gig in Nashville, they were in the studio with producer Charlie Peacock working on music.  The duo’s second ever performance was recorded and released for free as the live album, Live At Eddie’s Attic (you can still download this album for free at the Civil Wars website).  Shortly thereafter, The Civil Wars followed this up with the EP, Poison and Wine, and the notoriety came with it.  The title track from that EP was used in an episode of Grey’s Anatomy.  The EP released days later and was a top seller on iTunes.  The Civil Wars were booked on Leno.  Paste Magazine called them a “band to watch”.  They performed a “tiny desk concert” for NPR music.  They performed on Prarie Home Companion.  Stars (Taylor Swift, Steven Tyler, and Adele) were tweeting and blogging about them.  VH1 was playing their video.  They were nominated for American Music Awards.  And, almost all of this was before the The Civil Wars released their first LP, Barton Hollow in February 2011.

So, what is the next logical stop for the Nashville juggernaut?  Well, a stop at the amazing Daytrotter studios to record a session, of course!  Click here to listen (and download) the session.  Definitely loved the cover of Smashing Pumpkins “Disarm” in there….  Best of luck, you guys.

By the way, Civil Wars, if you are looking for a venue to perform in around Nashville, I know a certain seven year old that wants you to come and play at her house.  Drop me a line, and I’ll give you the address.