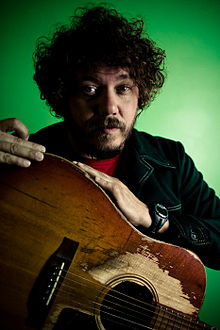 He has released albums with his group, Bare Jr., with his second group, The Young Criminal Starvation League, and solo.  He is the executive producer of an album of Shel Silverstein songs “Twistable, Turnable Man” which features BBJr along with acts like My Morning Jacket, John Prine, and Dr. Dog.  Recently, Bobby headlined a Pixies cover act in Nashville called Is She Weird, Is She White?.

BBJr has an extensive touring history with acts like Andrew Bird, The Black Crowes, The Decemberists, Bob Dylan, Dr. Dog, and Aerosmith.  Lately, he has been touring the country in a string of “house parties”.  His latest house party will be in Nashville on July 23rd.  Here’s the catch with the house party.  You have to buy the tickets and then you get an email with the location prior to the night of the show.  It is a sensation that lots of artists are working with these days (I plan to write a post about house party touring bands in the future, so check back).

I can’t say that BBJr had any direct influence on my decision to move to Nashville, but, when I was visiting last year, it was a BBJr show at the Basement that got me excited about the different music scene that Nashville has to offer.

Click here to buy tickets to the house party in Nashville.  You can also click here to download a copy of his new EP (either for a donation or for the cost of an email address).  You can also check out his 2009 and 2011 Daytrotter sessions here.  Also, there are a couple of tracks below that you can check out.

Get out there and see some music, and meet some people while you’re at it.