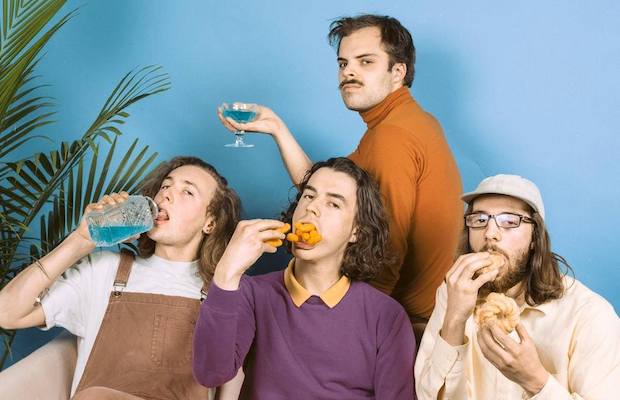 While it feels like they sprung out of nowhere in early 2017, Vancouver’s Peach Pit can actually trace their origins back to high school, formed by longtime pals, frontman Neil Smith and guitarist Chris Vanderkooy, and rounded out by bassist Peter Wilton and drummer Mikey Pascuzzi. Adopting a sound they self-describe as “chewed bubblegum pop,” the group’s laid back, poppy, indie slacker rock is actually the product of a lot of practice and forethought (they practiced for a year before ever playing a live show), initially earning the band a respectable local following and regional buzz for their debut EP, Sweet F.A. (an abbreviation for Sweet Fuck All- an ode to Smith’s love for the lazy life). After their self-titled track (and source of their name), “Peach Pit,” unexpectedly went viral on YouTube, earning the group millions of plays, they swiftly amassed a global fanbase in 2017, seizing on their buzz by releasing their first full-length, Being So Normal, in the fall of that year, and embarking on an impressive tour slate across not only North America, but Europe and Asia as well.

Funneling themes of raw and earnest teen angst through a quirky, catchy, and laid back aesthetic, finding a sound that lands somewhere between Mac Demarco and Homeshake (and, like Demarco, fully embracing the long-lost art of the guitar solo), enhanced by their own affable, friendly, and oddball appeal (notably, they wear the exact same normcore-esque thrifted outfits at each show), Peach Pit have forged a devoted and ever-growing following, making them one of the most buzzed about new bands in indie rock, and a growing staple of festival lineups. Now signed to major label Columbia Records, the Canadian foursome seem poised to be an enduring force in indie rock, and they make their debut at Bonnaroo at that interesting time when they’re already decently established in many circles, but likely still a new name to a lot of general audiences. For our money, they’re one of the best rock bands of the entire lineup this year, and a Thursday set you should absolutely make a priority!