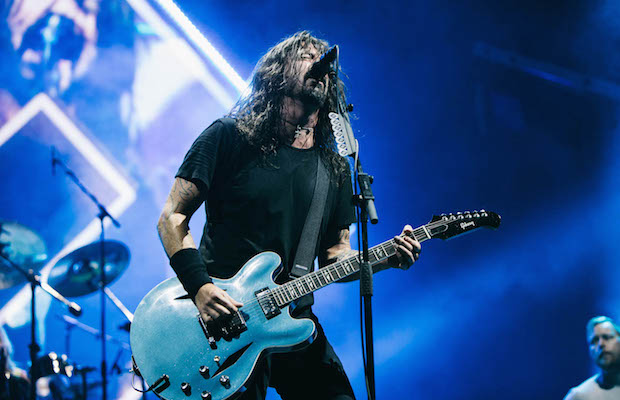 Though originally slated for last October, a last minute family emergency forced Foo Fighters to postpone a handful of tour dates, including a planned return to Nashville’s Bridgestone Arena, to this spring. Still out with buzzy British up and comers The Struts, the extra six months served only to build our anticipation to see the iconic alt rockers back in Nashville, a city they’ve had plenty of ties to in recent years, in the same spot they absolutely floored us in in 2015. Supporting last year’s excellent new LP Concrete and Gold, Dave Grohl (this time with two fully functioning legs) and co. brought every bit of excitement, unpredictability, and rock and roll spirit we’ve come to expect, and once again delivered an inspired, raucous, and unforgettable show, complete with a super-sized set, yet another viral audience stunt, and an ongoing reminder of why rock music still matters in 2018. Check out full rundown on the show below!

While I usually avoid talking shop when writing a review, in this instance, it’s pertinent to the experience: Upon arriving to the venue and hitting a bit of a snafu with picking up my review ticket (which is usually somewhere in the seated section with a clear view), I was given a pass to to the GA floor section. Some might grumble about not having a designated seat, but for a Foo Fighters show, I couldn’t think of a more ideal way to watch, and since I was already at the venue super early, I managed to make my way right up front to feel fully immersed and surrounded by diehard fans- something I’d highly recommend if ever you’re attending a Foos show.

After last fall’s delay, the postponed date kind of snuck up on me, and served to kick off what would be a full week of catching great and different performances each night. Unsurprisingly, this show set a high bar, and, though I didn’t realize at the time, it was the final stop of a spring run, I believe mixing new and postponed dates that extended from last year’s initial Concrete and Gold tour. Every Foo Fighters show is epic, so I’m not sure “last night of the tour” makes that much of a difference, but, on the flip-side, they also had no signs of wear from intermittent months on the road. 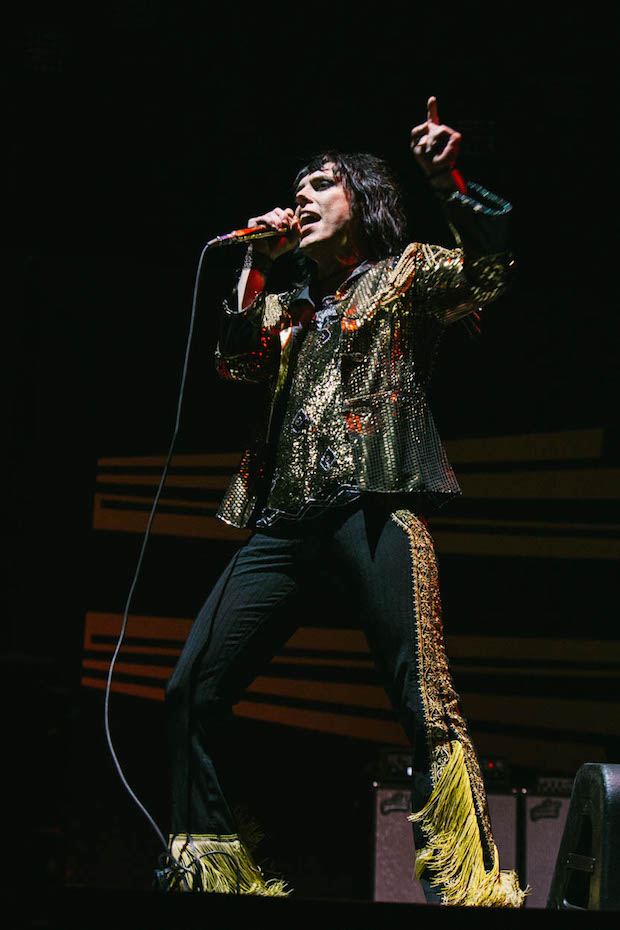 Right on time, The Struts took the stage, playing to a fairly full and punctual crowd of eager Foos fans, the bulk of whom seemed openminded to a new, still up and coming British band, who, on the surface, feel a bit at odds with the Foos’ laid back, low-maintence vibe. With flashy clothes, makeup, and stage moves, The Struts call back more towards glam rock of the ’70s, before the disaffected cool of ’90s alt rock shaped bands like Foo Fighters. One glance at the Foos’ choices of covers, though, would suggest that they have a huge soft spot for the sound and style The Struts are drawing from, and in that context, the pairing makes more sense (plus at a macro level, there aren’t a ton of well-known young bands striving to make rock primed for arenas). Doing his best to charm the audience with call and response and crowd engagement, frontman Luke Spiller managed to win over the room a bit more with each song, bringing his high-energy exuberance to familiar tunes like “Put Your Hands Up,” “Kiss This,” and “Put Your Money on Me.” I’d only seen the band once before, at a festival, and just in the couple of years since they’ve become way more confident and tight, no doubt shaped by this massive arena tour, which they seemed to have adapted to marvelously. Laying on thick his love for Nashville (which I’m sure is a nightly line, but it did seem sincere), Spiller proved more than up to the challenge of warming the stage up for an icon like Grohl, and by breakout single “Could Have Been Me,” I was eagerly hoping to soon have a chance to see The Struts in a small spot soon. 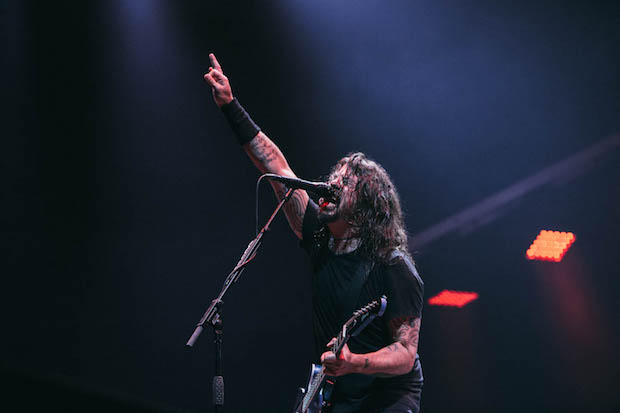 Revealing a subtly intricate stage setup, the changeover for Foo Fighters gave me plenty of time to slip into the closest spot I could, and kill the wait by Googling prior setlists. Like the last time I saw them a few years ago, the band have more or less been following the same format each show- begin with something of a plan in mind, checking off a certain number of boxes in covering a spread of new songs and favorites, and then, about halfway to a third in, essentially wing it, while cramming in as many songs and covers and impromptu jams as they can manage until curfew.

As I alluded to before, the group’s last Bridgestone outing came at a time when Dave opted to tour despite a broken leg, having a speciality Game of Thrones inspired guitar chair built specifically to keep the show intact. By Nashville, he was slowly becoming more mobile, hobbling around the stage some, between bouts of rocking out more intensely than anyone sitting down I’ve ever seen. It was cool and something I won’t forget, but it definitely left me yearning for the fully mobile, fully charged rocker I know Grohl to be. He delivered in spades this time around, guiding his talented and adaptable band though a set that was equal parts fan service and a reflection of band who, 25 years in, still seem overjoyed to just jam every night.

Opening with driving new song “Run” right into “All My Life,” before really getting the crowd wild with “Learn to Fly,” from the first note and high-energy entrance, this was a particularly engaged and transcendent set, enriched by a dynamic and tasteful overhead lighting display and functional staging. Being the nostalgia yearning 30-something I am, I kind of wish a little for every band to mostly stick to the the stuff I grew up with, and while plenty do, that’s a hard ask for a group like Foo Fighters, who’ve continued to make really great and relevant rock records in the later part of their career. That’s not to say the show wasn’t career-spanning- it was- but even with nearly three hours of rock and roll bliss, I was definitely hankering for a few deep cuts they didn’t make it to (and, to be fair, the set changes every night, so it’s a luck of the draw thing). 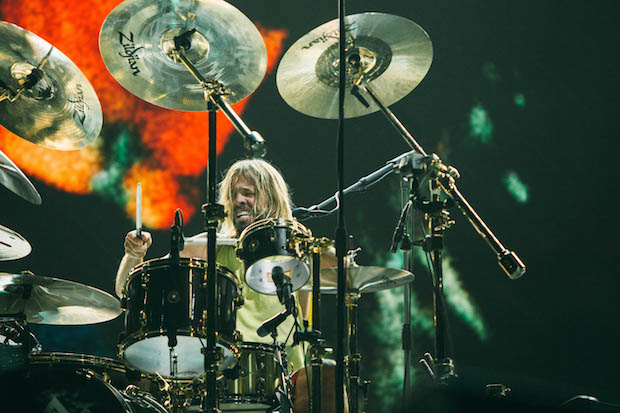 I would be remiss if I didn’t bring up Little Fonzie. In his typical, exuberant, and accessible style, Grohl did a healthy amount of audience interaction, commenting on (and making fun of) various signs, and singling out excited, very young fans. One such kid, perched on his father’s shoulders and rocking a tiny leather jacket Dave referred to as “Little Fonzie,” and kept addressing during subsequent crowd interactions. When it came time for band intros, where Grohl cedes the spotlight to drummer Taylor Hawkins, guitarists Pat Smear and Chris Shiflett, bassist Nate Mendel, and keyboard player Rami Jaffee, Little Fonzie and his father began creeping closer to stage, ultimately invited up by Grohl, where the literal child requested a chance to play drums. After an impressive first minute, it became clear that Fonzie had no intention of getting up, and for about five minutes, the band totally lost control of their own show, until finally coaxing him off the stage- you can watch the whole thing here, equal parts endearing and awkward, as it has since gone viral.

Back on track and running against curfew, after intros the band invited Luke from The Struts back out to do a duet of Queen and Bowie classic “Under Pressure” alongside Hawkins, with Dave hopping on drums- a goofy, earnest, and incredibly fun highlight that really sums up the Foo Fighters’ dynamic of fun, rock and roll camaraderie. As the set wound town, loaded with favorites like “Monkey Wrench,” “Times Like These,” and “Best of You,” energy reigned high and the singalongs and palpable enthusiasm hit a fever pitch. Though only around a 20 song set, the Foos’ have a knack for jamming and interacting and stretching things out, and by the end of the encore, finishing, of course, with classic hit “Everlong” the night had stretched on for hours and bumped into curfew, ending another thoroughly satisfying, blissful, and powerful Foo Fighters show.

As I’ve stated in past writing, it’s an incredibly weird time for rock music, and while there are countless new bands I love, many of the ones making the best, most relevant music are doing so at a comparatively microscopic level. I’m not sure when we’ll see the rise of a band with quite the mass appeal and artistic bona fides of Foo Fighters again, but as one of the last, true bastions of ’90s alternative rock, and a group still championing rock and roll today as loud and relevantly as anyone, I’m eternally grateful that they’re still making music (and making it for the right reasons), and I can’t wait until I get a chance to Foo Fighters, fresh and different, in Music City once more.

Dirty Water
This Is a Call
Everlong 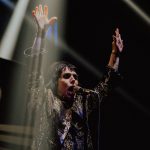 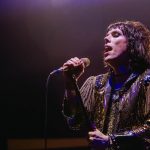 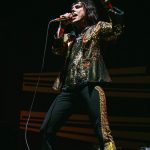 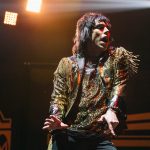 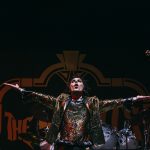 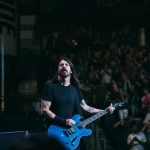 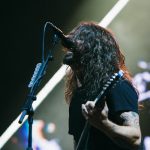 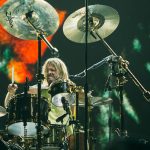 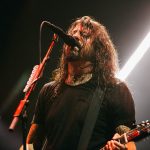 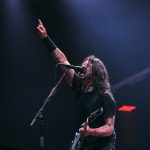 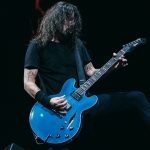 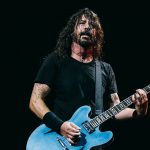 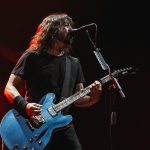 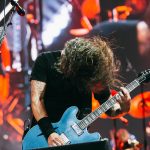 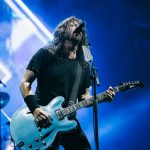