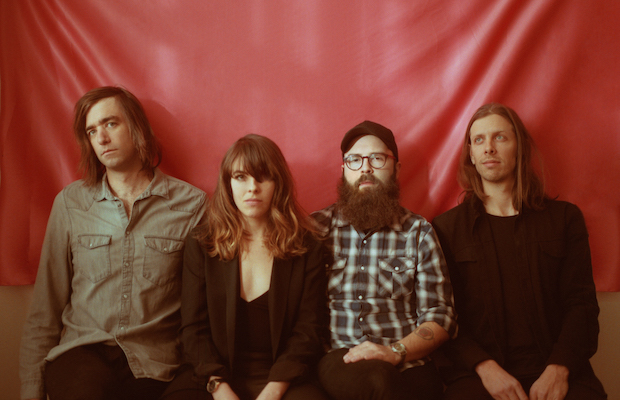 For whatever reason, this has been a particularly packed week for fans of bands in the punk, emo, and indie sphere, and this weekend isn’t slowing down, with both a sold out Jimmy Eat World show at The Ryman, and another, slightly less on the radar tour that should be equally deserving of your attention passing through Exit/In tonight, May 12, featuring Hop Along and Saintsenca.

Led by frontwoman Frances Quinlan, Hop Along (then known as Hop Along, Queen Ansleis) formed more than a decade ago, initially conceived as a freak folk solo project, before morphing into a full band a few years later and settling on the punk, emo, and grunge tinged flavor of alternative rock they play today. Hop Along’s first full-band album, Get Disowned, arrived in 2012, immediately grabbing the attention of the music press, and resonating with a wide range of fans, especially in the punk world, leading to a deal with Saddle Creek. Versatile enough to tour with everyone from Modest Mouse to Dr. Dog to mewithoutYou, the group’s 2015 effort, Painted Shut, further boosted their presence and landed on numerous year-end lists, featuring a more focused, indie rock rooted sound with personal and effective songwriting. Brand new followup Bark Your Head Off, Dog further builds on the last record’s template and feels even more refined and confident, rich with dense, literary and story-driven lyricism, eclectic and often surprising musical turns, and a resonate, raw effectiveness which should soar in their energetic, magnetic, and engaging live show.

While Hop Along sprung from a folk influence (and their label Saddle Creek, is known for facilitating the careers of folk-rooted, emo-friendly performers like Bright Eyes), Ohio’s Saintseneca where that same influence much more heavily on their sleeve, fusing an alt and indie rock sensibility, while maintaining a more melancholy, clean, and harmony-dense aesthetic. In their decade-long run, though, they’ve also stayed closely aligned with the punk and indie scene, finding breakout attention for their Mike Mogis produced, ANTI- Records debut Dark Arc in 2014, which they’ve followed with another record, an EP, and some stellar recent singles. These bands are a great compliment, and fans of one are sure to be obsessed with the other.

While tickets are still available here for now, if you can’t make it to the show, or simply can’t get enough Hop Along, you can also catch a very special free, all ages in-store performance from Frances Quinlan at 3:30 p.m. at Grimey’s. While she hasn’t released any solo records, at least not recently, Quinlan has been embarking on occasional runs alone lately, most recently supporting Conor Oberst last fall. Expect a cool, stripped down versions of Hop Along favorites and maybe some unexpected additional tunes, but definitely check out the full Exit/In show too for the entire set!

Hop Along and Saintseneca will perform tonight, May 12 at Exit/In. The show is 18+, begins at 9 p.m. (doors at 8 p.m.), and tickets are available to purchase for $18. Hop Along’s Frances Quinlan will also play a free, all ages in-store performance at 3:30 p.m. at Grimey’s.