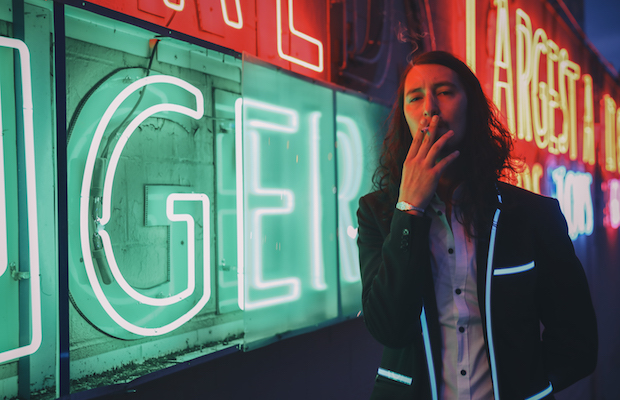 It’s been a few years since we’ve heard new music from talented songwriter Jacob Thomas Jr. He made waves in the local scene with his stark and honest debut, Original Sin, back in 2014, which described his fall from God that ultimately led Jacob to Nashville to pursue his passion. His first record tackled his dramatic life-changing journey from Louisiana pastor to aspiring musician, when he was fired by his own church for spending too much time performing in bars, left his wife, and moved to Music City, but, backed only with an acoustic guitar and ragged voice, showcased a talent that perked the ears of the music world.

We hosted the rising artist at a showcase around the time of the original release, and found that he had more to offer than simply a man and a guitar act, as he kicked things up a notch with a full band performance that nodded more towards Ryan Adams than brooding solitaire. His upcoming record, Electric Sex (due out March 16), brings that style and those songs to the surface, as Thomas continues his self-growth and exploration. “At 25 years old, I said ‘fuck it all,’ he tells us, “and this album is me trying to reclaim my sexual identity after years of growing up in the church.”

For the new record, Thomas has enlisted the help of a talented troupe of artists, including pedal steel wiz Drew Belk, Jason Morant on keys, bassist Jason Harris, and Jake Finch on drums. The result is powerful and enticing, and, as you can hear in our premiere of the single “Man in Need,” downright sexy too.

Head below to give it a spin, and mark your calendar to see Jacob Thomas Jr. at The Basement on Jan. 24 as part of Caroline Spence’s ongoing residency.