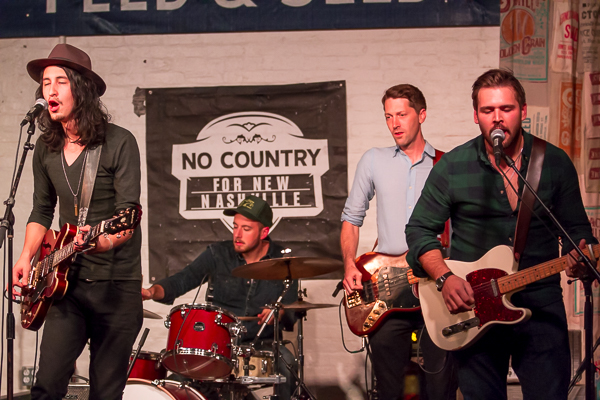 Well, hopefully you didn’t think for a second that we’d stop doing our weekly showcase with Acme Feed & Seed, but, if you did, have no fear! It is still going strong into November, and this past Tuesday’s show was another hit. Local, via Lafayette, LA, Jacob Thomas Jr. brought the rock ’n’ roll with his impressive backing band, and local, via Montana, Guthrie Brown and the Family Tree opened it up with some fun pop folk. Altogether it was another great night of music from No Country Presents, but, judging by the turn out, you might have missed it.

Lucky for you, we have a recap of it all after the jump, and we also have some amazing photos from staff photographer Brian Hill. On a night when there was no shortage of great shows, we were sorry we didn’t see more familiar faces, but it’s OK, because you can join us every Tuesday, going forward, at Acme Feed & Seed for future installments of No Country Presents.

With CMA awards week in full swing, I was surprised there wasn’t more traffic on my rain soaked trek downtown. There was also a crazy number of great shows (The New Pornographers, Death From Above 1979 to name a few) going on at the same time that night, so I really wasn’t sure what to expect. One thing was certain; the only parking available would be quite a hike from 1st and Broadway.

Once I’d made it to Acme, I had a few seconds to say hello to the crew and my photographer, and then it was time for the music to start at eight sharp. The crowd was as large as I’d ever seen it for our showcase, a combination of Acme’s usual dinner rush, and no doubt double the foot traffic on Broadway for CMA awards, even with the rain. 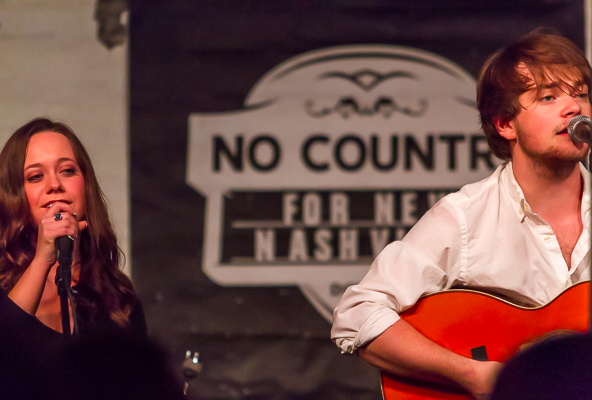 Guthrie Brown and the Family Tree. Photo by Brian Hill.

Fresh-faced and young, Guthrie Brown and his band, the Family Tree bopped about on stage from the start, bringing high energy, and happy vibes. Bubblier than the tunes to come later. He had an excellent pedal steel guitar player in the band that had me hooked from the jump. Pop folk with wonderful vocal harmonies … pretty songs, from pretty people. At times they flirted with country sounds, but the twang really wasn’t there. They closed with my favorite song of their set. “Summer Time”, which I recommend you down load immediately.

After they’d finished up, the crowd had thinned dramatically, as patrons rushed to close out their checks and get on with their Broadway/CMA award week experiences. It was a bummer to watch, because I knew that the fellah playing next was well worth sticking around for. 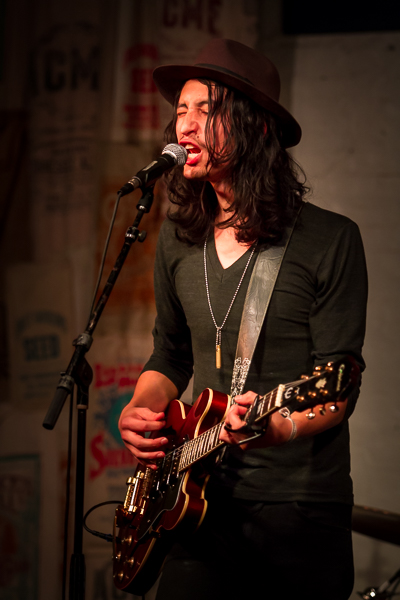 Opting to start his set solo, Jacob Thomas Jr. came out looking like a rock star. Tall and slender with the hat and long locks; he fit the part. His beautiful red Epiphone hollow body guitar glistened in the light, but it was mostly for naught, because the somber, quit nature of his first couple songs didn’t seem to draw in the dozen or so people still there. Later he told me he had never even been to Acme before, so he had two game plans for the night, based on how the crowd reacted. It was time for plan B.

He brought his band on stage a few players at a time, but when it was five men strong they were a sight to behold. Full on rock ’n’ roll, with a dark, slightly jaded lyrical content. Think a more country fried version of Ryan Adams in his Cardinals phase. Jacob and his homies had the chops to warm up what little crowd was still gathered, and they even brought a few stragglers in off the street with their awesome loudness. His pedal steel player rivaled Guthrie’s, and I was eating it up. Their Cranberries cover of “Dreams” was pretty epic, but I liked his closing song even better.

“I’ll be placing all my bets,” he sang. “On the red hot glow of electric sex.”

What’s not to like? So next time you’re looking to kill a Tuesday night, come join us for our weekly showcase at Acme. We’ve already got a new lineup ready to go for next week, which you can read all about here, so bring a date, a friend, your fam, whoever! Great food and some great, FREE local music. Hope to see you there!