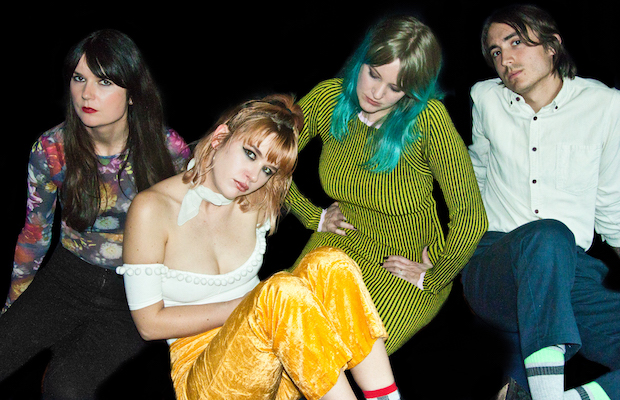 Since the release of their sophomore album, last year’s Welcome to Worms, we’ve been pretty obsessed with LA punk outfit Bleached, and managed to catch them live several times throughout 2016, both in Nashville and at festivals. With a substantive, melodic, and personal style, their compelling songs and electrifying performances have made them one of the most exciting up and coming acts around, and, along with a fantastic musical output, Bleached have also emerged as a refreshing, thoughtful, and urgent social and political voice in the modern punk landscape.

Frustrated at all too frequently being labeled or defined by their gender, especially after crafting an amazing record of songs with personal, relatable, and universal themes, the band have announced a new EP, Can You Deal?, due out March 3 on Dead Oceans. Along with the EP, frontwoman Jennifer Clavin has announced a limited edition zine of the same name, featuring contributions from an unbelievable array of female voices from throughout the music scene. In a statement, Clavin explains “Labeling me as a woman in a band just puts me in a box, and doesn’t allow everything else I am to be seen and heard. It’s 2017, Can You Deal with women playing rock and roll yet? This zine is a collection of shared experiences from other artists as told through exclusive essays, stories, visual art, poetry, and lyrics.”

Among the many impressive and familiar contributors set to be featured in “Can You Deal?,” we’re proud to see some prominent and exemplary local artists – Bully’s Alicia Bognanno, Paramore’s Hayley Williams, and former Nashvillian Julien Baker, three examples of individuals who excel in their artistry, provide a positive and necessary social voice, and, it goes without saying, in no way deserve to be strictly viewed or confined by their gender.

You can pre-order the zine here (limited to 500 copies, so don’t sleep on it), with all proceeds going to benefit Planned Parenthood, and check out “Can You Deal?,” the title track from their upcoming EP of the same name, below!

[Premiere] Stream the Super Duper Remix of Whissell’s “Get Free”