Last month, beloved emo outfit Dashboard Confessional, who’ve become increasingly active in recent years after returning from a hiatus, announced a series of intimate shows at The Basement East, initially Feb. 21, 22, & 23, with outings on the 26 and 28 promptly added after the first three sold out immediately. Tacked onto the end of a tour which has sold out (much larger) clubs across the nation, these performances are extra special, because they mark the first frontman Chris Carrabba has played in town with Dashboard since becoming a Music City resident (he’s played under his own name, as well as with Twin Forks, on a a handful of more recent occasions).

Because it’s something of a homecoming, the band have just announced a very special, all-local slate of opening acts, comprised of up and comers from Nashville’s indie, emo, and pop punk scene: Secret Stuff, Bogues, Pale Lungs, Pocket Science, Daisyhead, YØUTH, Slow and Steady, and Body Origami – all names you’re likely to be familiar with if you read this site (or if you’ve seen this Noisey article on Nashville’s emo scene, which this very editor also penned).

Obviously, this is a very exciting showcase of some local talent who often don’t get nearly enough attention, as well as a super cool way for Dashboard to give a nod to their new hometown, by helping the next generation of likeminded bands find a broader audience. 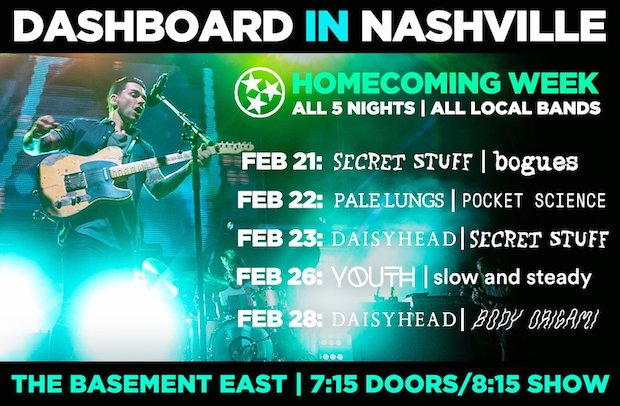 While the first three nights have long been sold out, you can still get tickets to Feb. 26 featuring YØUTH and Slow and Steady here, and Feb. 28 featuring Daisyhead and Body Origami here. We don’t expect tickets to last, so jump on ’em quick if you’ve been procrastinating.

After last month’s show announcement, and ahead of their long-awaited, highly-anticipated full-length followup to 2009’s Alter the Ending (which is definitely in the works, but has no firm date), Dashboard debuted a surprise EP of covers, dubbed Covered and Taped, where they tackle tunes by The 1975, Julien Baker, Justin Bieber, and Sorority Noise. The inclusion of a cover of Baker, who, until recently, also called Nashville home, is another wonderful nod to the local scene. Listen below!