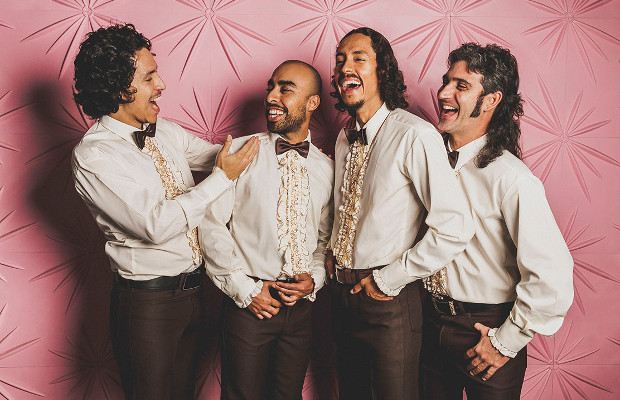 Chicano Batman hail from Los Angeles, California and feature Carlos Arevalo on guitar, Bardo Martinez on vocals/organs/guitar, Eduardo Arenas on bass/vocals, and Gabriel Villa on drums. While the band have been around since 2008, the widespread attention they are receiving is very new and fresh. The group supported Jack White on some dates of his Lazaretto tour, and also performed at Coachella last year, and, earlier this month, many outlets celebrated them as of the best acts at SXSW this year after completing a slew of killer performances across Austin.

The group say both their name and their songs are meant to “champion the underdog,” and have released two LPs, most recently 2014’s Cycles of Existential Rhyme. For years, they have been aiming to bring the Latino culture to the spotlight in Los Angeles and across the country. Musically, their style is a very fascinating mixture of Brazillian tropicalia, soul, and psychedelic rock. It’s as if Spanish experimental artist El Guincho and rockers The Growlers hooked up and formed a band together. The group’s songs are upbeat and delicate; layered with reverberating guitars and vocals, and supported by drums that move in the right direction every time. Their ability to combine psychedelia with their own ethnic influences is impeccable, so be sure to check out Chicano Batman’s set at Bonnaroo this summer and watch them become your new favorite band.