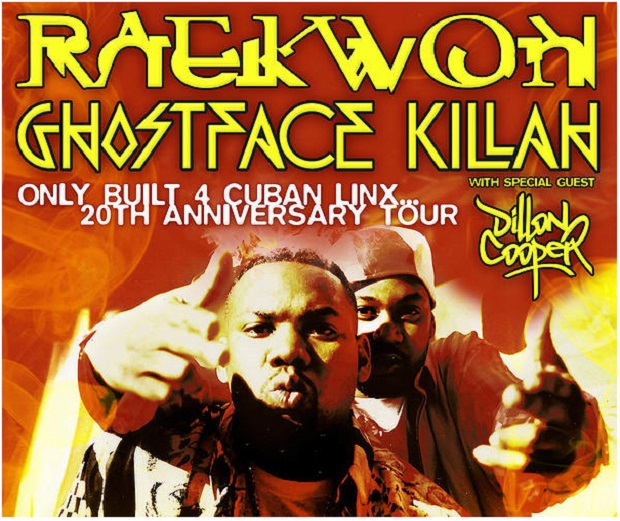 It’s not often you have a chance to see a member of the legendary Wu-Tang Clan in Nashville. It’s even more rare to see one of them playing one of the most classic hip-hop albums of all time. Tonight you have the opportunity to see both of these, plus another Wu-Tang Clan member! Raekwon (the Chef) and Ghostface Killah (aka Tony Starks aka Pretty Toney) bring their Only Built 4 Cuban Linx 20th Anniversary Tour to Marathon Music Works tonight, July 28. Showtime is 8:00pm, and Dillion Cooper & Jung Youth open. Read more about each act after the jump!

The duo of Raekwon & Ghostface Killah is arguably the best combination in the Wu-Tang Clan. If you want proof, look no further than Raekwon’s debut solo album Only Built 4 Cuban Linx. The street crime epic features Ghostface on more than half the songs, and their chemistry is impeccable. Each of them are accomplished enough in their own right, but together they become something else. For a genre as young as hip-hop, touring an album for its 20th anniversary is an impressive feat, but Wu-Tang has been around since the early 90s. At this point, these guys are pros, still doing it better than most of the up-and-comers out there. Opinions on full-album shows can be relatively split, but you won’t hear any complaining from me about getting to see one of the best albums ever made performed live with two of the living members of one of the best hip-hop crews of all time.

Dillon Cooper is only 21 years old, and was already an accomplished musician before he even started rapping. But after dropping out of Berklee College of Music, he put down his guitar for a mic and hasn’t looked back since.  He spits carefully constructed rhymes over infectious beats that appeal to a wide variety of hip-hop enthusiasts. Catch him now while he’s still opening for people – pretty soon he’ll be headlining shows just like this.

Jung Youth is the alter ego of Nashville-based rapper Justin Donahue. He and his band will hit the stage in support of their brand new record Yada Yada, which you can (legally!) download for free on their official website here.

Raekwon & Ghostface Killah, Dillon Cooper, and Jung Youth will perform July 28 at Marathon Music Works. The show is 18+, begins at at 8:00pm (doors at 7:00pm), and tickets are available here for $25.