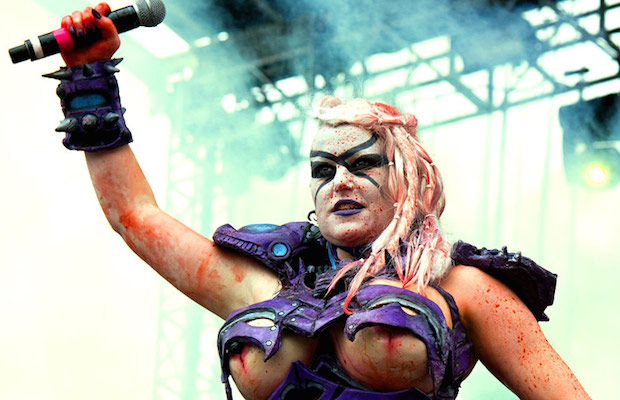 It appears that it will take not one, but two new vocalists to replace late GWAR frontman and founding member Oderus Urungus (a.k.a. Dave Brockie), who died of an accidental heroin overdose earlier this year. After taking several months to regroup, the part-band part-performance art collective brought former member Mike Bishop (who, from 1987-1995 performed on bass as Beefcake The Mighty, a character which has since been passed on to subsequent players) back into the fold as a new vocalist, dubbed Blöthar. Blöthar made his debut at this summer’s annual GWAR B-Q, at which Oderus was given a fitting viking funeral (no, really), and, at last weekend’s Riot Fest Chicago, a new co-vocalist, Vulvatron, joined as well. While GWAR have yet to comment, Vulvatron, who is portrayed by Kung Fu Dykes’ Kim Dylla, is expected to accompany the band on their fall tour, which will hit Nashville’s own Exit/In on Dec. 2. Corrosion of Conformity and American Sharks will support, and tickets are on sale now for $20. If you’re somehow unaware of the insanity and immersive, crude, theatrical experience that is a GWAR show, do yourself a favor and Google it. Fan or not, it’s a once in a lifetime experience, and cramming it all into a room as tiny as Exit is sure to be an extra special outing.