by No Country
in Features, Interviews, Reviews
1 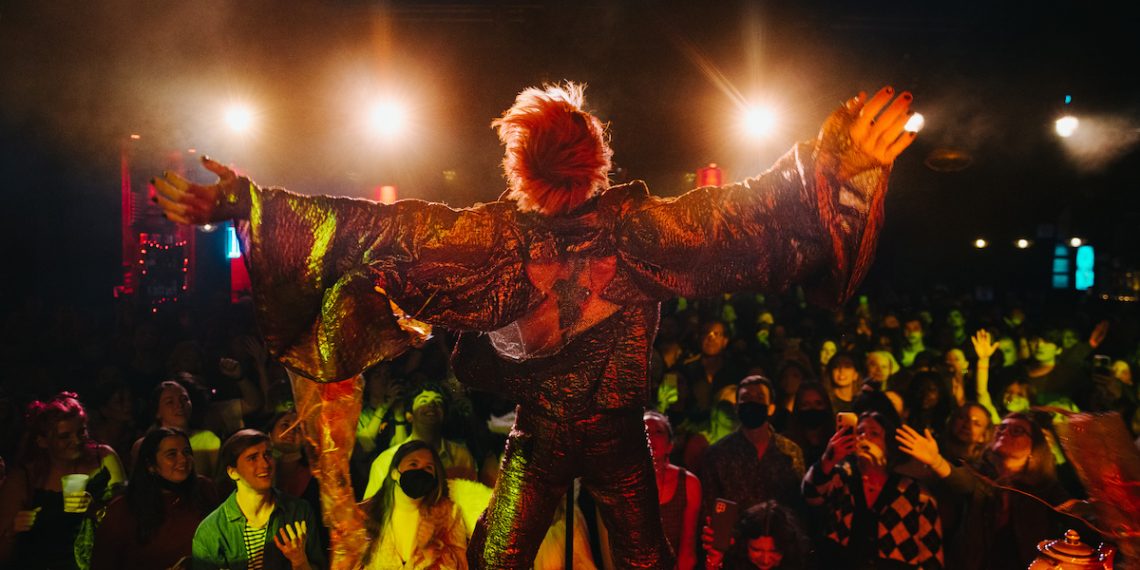 Feature by Tess Schoonhoven. Photos by Jakob Wandel, courtesy of the artist.

Creating a moment that fuels joy, inspiration, and lasting emotion is a tall order, but for most artists, it’s an ongoing reality. Quickly growing retro pop icon Jake Wesley Rogers shoulders this prospect with boldness and confidence, creating music that translates into slivers of magic as he performs.

Rogers, a favorite local artist of ours for the past few years and a would-be performer at this year’s canceled Bonnaroo, took to The Basement East stage last Wednesday, October 27, in front of his biggest sold out crowd as a headlining artist. Belmont student Jules Paymer opened the night after being selected to perform by Rogers from approximately 80 student applicants.

The room was filled with friends, family, and those whom Rogers’ intimate, bold music has touched so deeply. The show was a vivid picture of love – bright, beautiful, and passionate.

“I try to treat these shows like ceremonies… they’re rituals in a way,” Rogers told No Country For New Nashville beforehand. “It is magic, because magic is just your will affecting someone else. So I feel like I can bring good magic into the world, bring good light, because I can bring a will of hope and peace and there’s lots of people who need that; I need that.”

Rogers has carved a niche for himself in inspirational pop music akin to icons Sir Elton John, David Bowie, Madonna, and Lady Gaga. Their influences, combined with Rogers’ own theater background bring an eclectic nature to the young artist’s live act. A white piano glittered with strings of stained glass, a teapot labeled “tea for two,” band members dressed in white and black chorus attire, Jake himself clad in sparkling gold, sheer fabrics – each element working toward the magic of the moment.

Rogers truly exists on his own timeline. As he performed songs like “Middle of Love” and “Pluto” in the intimate East Nashville space, it was as if the world started to turn on a separate path of love, found in the room and in the melody. His writing carries a sense of power in freedom, and freedom in honesty, which so many listeners clearly found themselves drawn to. Possibly beginning to reckon with their own struggles, the audience joined Rogers as he declared love over them. In these moments, the crowd raised their hands in honor of that love we all know we want, and the idea that just maybe, we can find it together.

“The role of the artist is to drop keys for people, in whatever cage they might be in, because we’re always in some cage,” Rogers continues. “Music is so interesting because it exists in a different place, it’s not from here, and I really believe in it’s power to guide us and find more meaning in our life. That’s why I really take it so seriously and never settle in my authenticity or putting my story in something, because those are the best songs – the most specific songs.”

Deep connection is unavoidable when taking in Rogers’ music and live performance. Telling stories about his 15-year-old self, life experiences as a queer person in Missouri, his authenticity is what commands the stage and leads listeners into each part of the experience right alongside him.

“When I sit down to write it’s ‘what have I noticed, what’s present in me right now?’,” Rogers explains, talking about his songwriting process. “A lot of these songs are about love and about breaking free from old patterns and the mold I was taught – what a relationship is, what it means to love and be loved – it all kind of carries through.”

While everyone may not relate to the specifics of Rogers’ story, the overarching connection is simply the human experience.

While there were some openly queer artists creating music when Roger was a child, he says he didn’t really know about them, especially those signed to major labels. Being so open, therefore, is really important not just for other 12-year-olds in Missouri right now, but for everyone. “I think the more me I am, the better everything is and I hope it empowers people to feel more free to be themselves.”

With an arena tour alongside Ben Platt drawing near in 2022, we are looking forward to what Rogers does next, excited and honored to witness and receive his creativity.