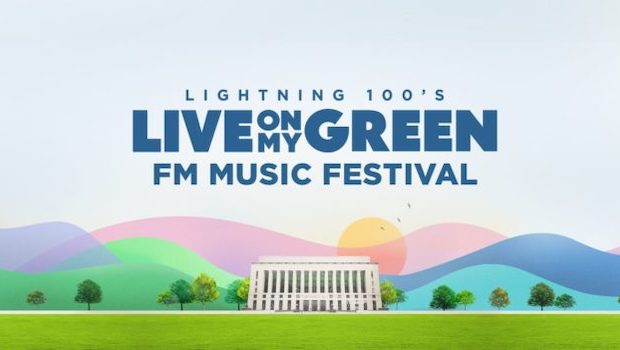 In a normal year, we would’ve spent our last several Thursdays in Public Square Park, enjoying what would no doubt have been a stellar twelfth season of Live on the Green, Nashville’s premiere annual free, outdoor music fest, and a beloved fixture of our festival season, which would be winding down with its signature Labor Day Weekend finale.

But, alas, like all live events and public gatherings, LOTG, in its conventional form, was canceled months ago, leaving us to count down the days until next summer, when, hopefully, music events will be back to something resembling normalcy. Not content to simply call it a loss, however, the industrious folks at Lightning 100 and Live on the Green have, like so many other events and musical entities of the last six months, found a creative way to keep the spirit of LOTG alive, and have put together an absolutely stunning five-day audio and video stream they’ve dubbed the Live On My Green FM Music Festival.

Running today, Thursday, Sept. 3 through Monday, Sept. 7, with programming spanning more than 20 hours a day, Live On My Green will largely feature previously recorded performances beamed over Lightning 100 (which you can find on the FM dial, online, though the Lighting 100 app, or even through your smart speaker), with a handful of performances also offering video streaming, along with a few of what are being billed as live video streams (which sound to be pre-taped like the rest of the performances, but are special and unique live sets) from the likes of Fruition, Jason Isbell, Spoon, LP, Beck, Rainbow Kitten Surprise, Briston Maroney, Moon Taxi, Drumming Bird, James Ethan Clark & The Renegades, Catalina, Oddnote, Taylor Noelle, Fulton Lee, The National, Future Islands, and Judah and the Lion, plus new interviews and unheard content, some guided yoga classes via Zoom (an in-person LOTG tradition), and more! Lightning 100’s YouTube is the best place to catch those video streams.

Tune in for free all weekend long, check out the site for the most up to date info, and peep the whole schedule below! 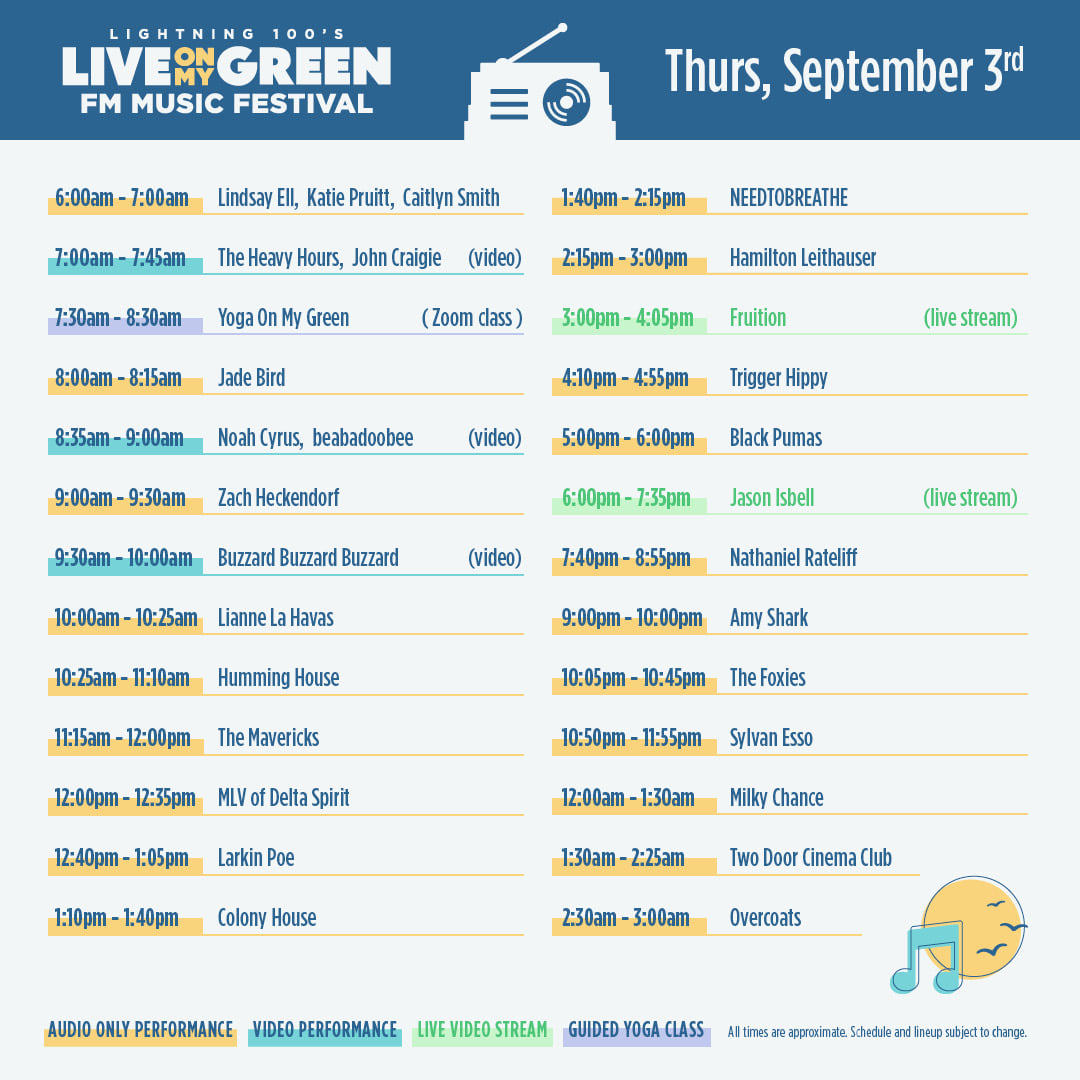 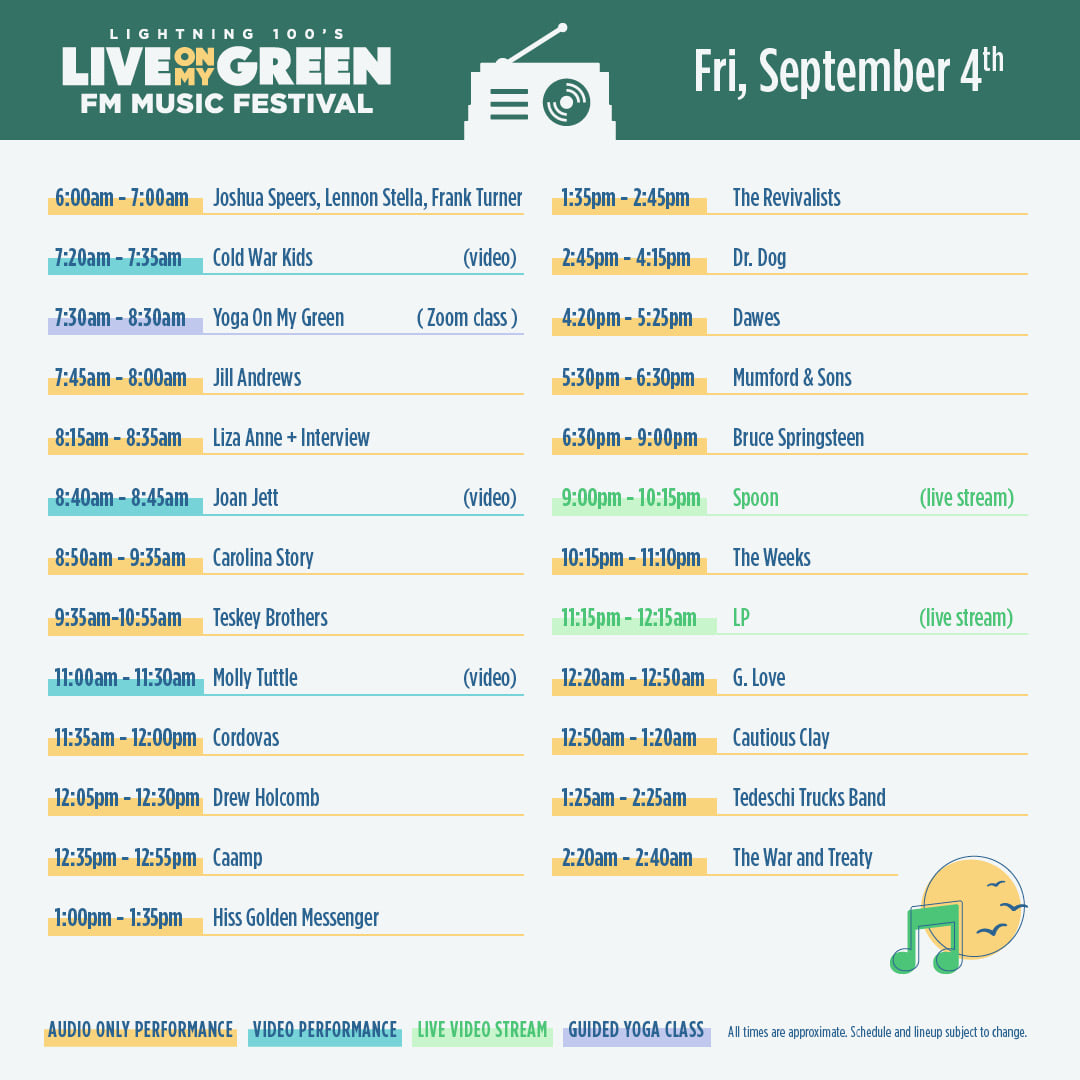 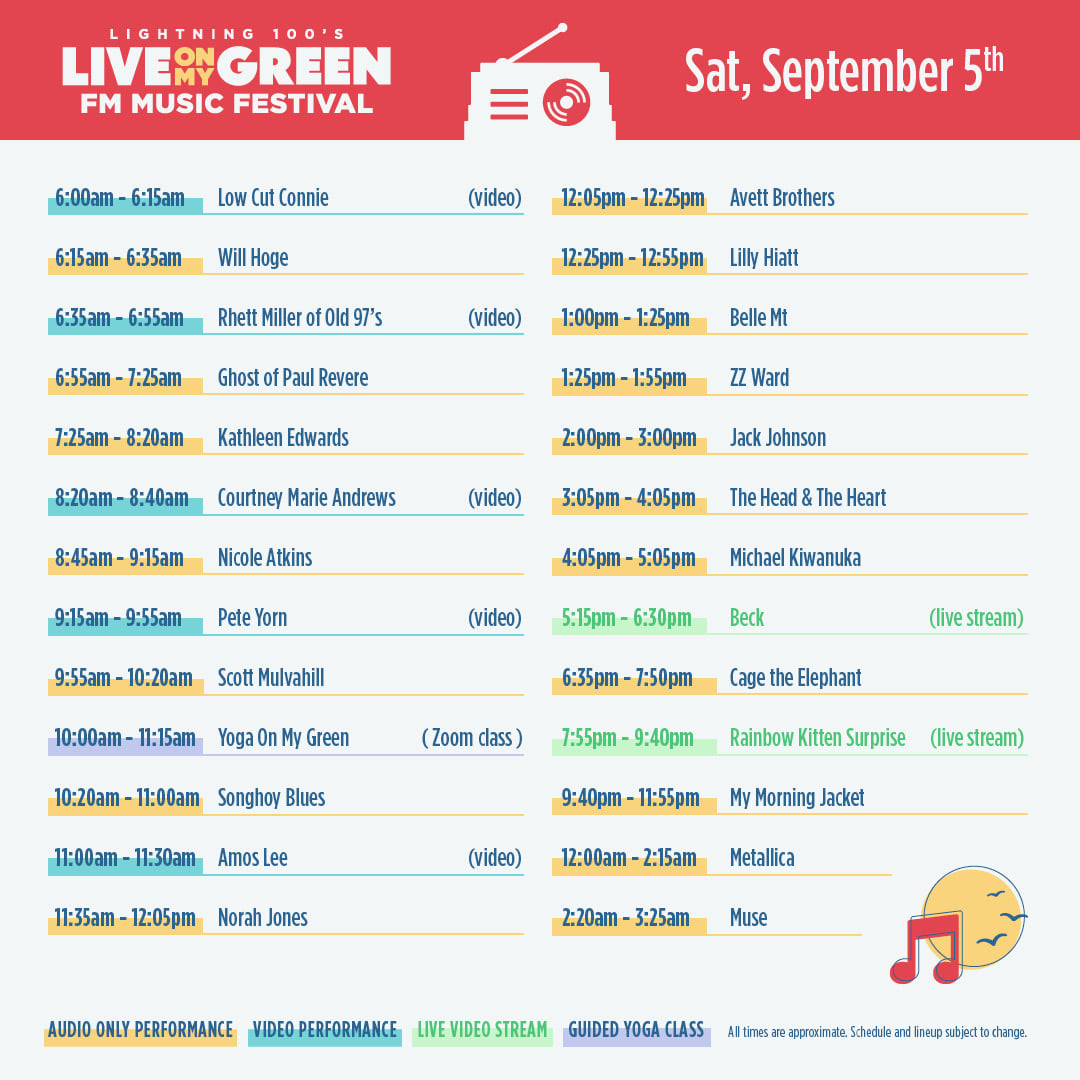 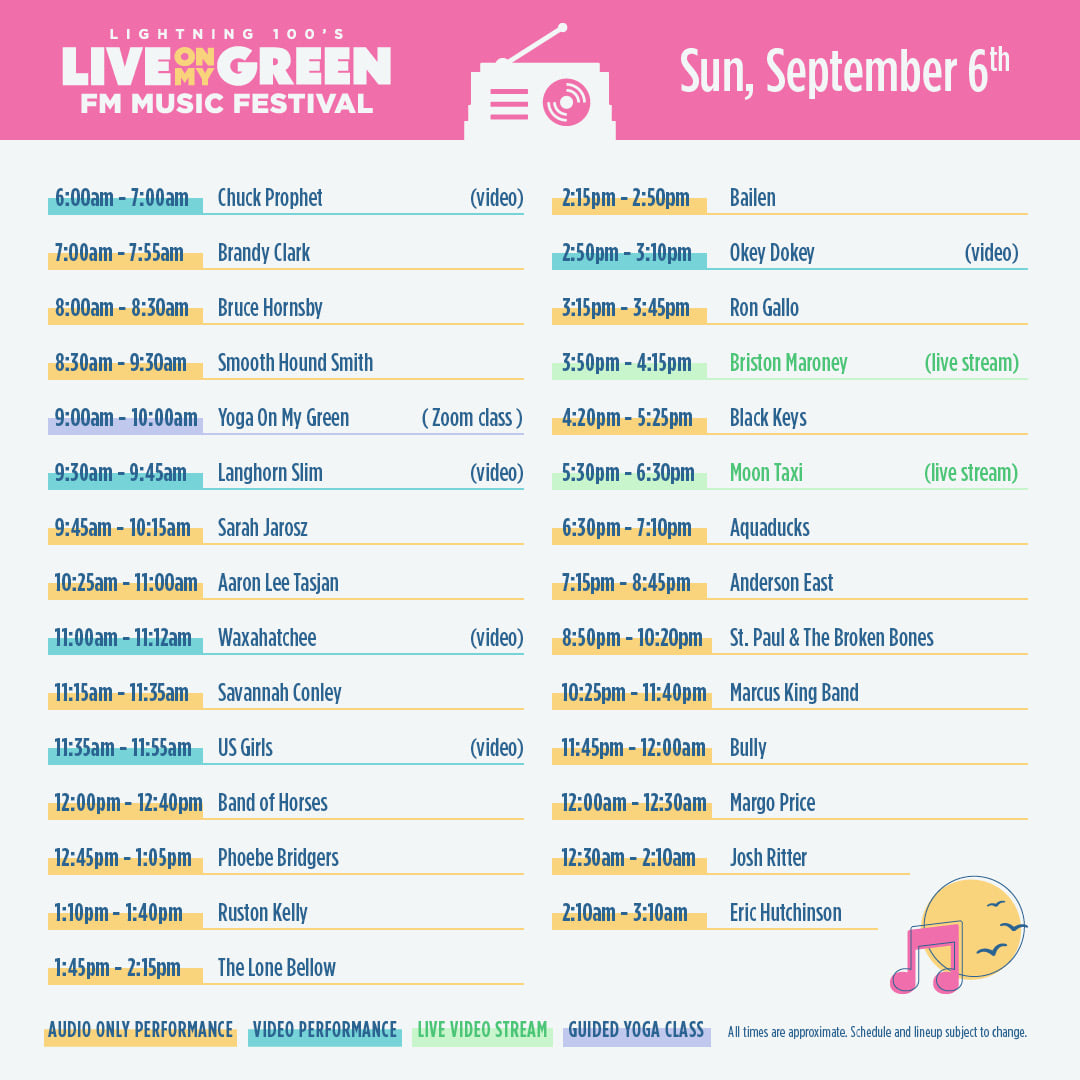 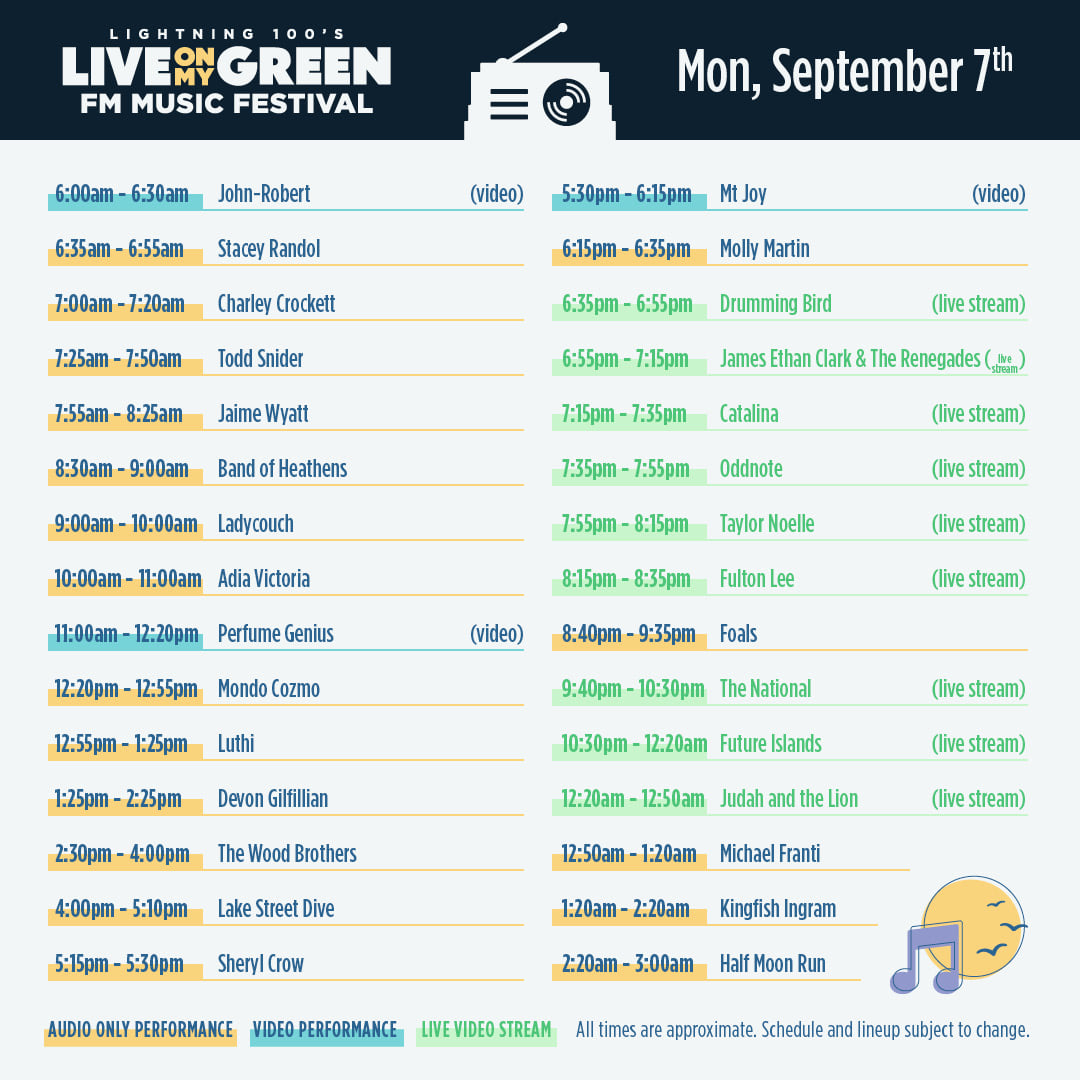 Tags: Live on My GreenLive On The GreenNashville Music Blog