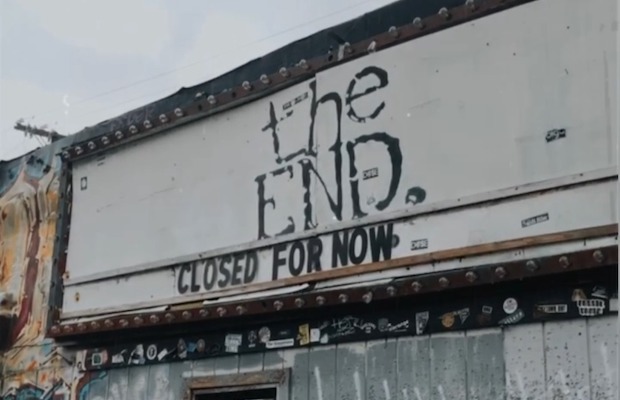 It was only a few weeks ago (though it feels like an eternity) that our community was aching from the aftermath of a devastating tornado, which among other things, destroyed beloved local venue The Basement East, dealing a huge blow to Nashville’s music scene. In the weeks since, with nearly every aspect of daily life and society alerted by the spread of COVID-19, live music has come to a total halt, displacing countless freelance and service industry employees, and particularly affecting the creative community, displacing venue and freelance music and entertainment workers, while also cutting off an important source of revenue for performing artists.

While it’s hard to see any sort of light at the end of the tunnel in these trying times, we have no doubt that Nashville’s tough and resilient creatives will find a way through (and/or sources of help and aid), incredibly difficult though it might be, but for some live spaces- particularly the smallest, most independent, lowest profit-margin venues whose continued existence in an ever-more-expensive city is a daily struggle in the best of times- many weeks or months without business could be a death blow.

There are so many big, new, flashy venues opening or in the works to be excited about, and certainly Nashville isn’t in danger of all venues disappearing, but without small rooms like Drkmttr, The End, The East Room, Springwater, and others, not only does the smaller, more underground, more creative side of the local music scene lose its outlet, but also some of the most essential up and coming national acts lose their places to stop through. These spaces are what helped make Nashville so cool in the first place (and, ironically, what attracted the corporate backed venues and developers who threaten their existence), and it would be an unimaginable shame to lose them because they’ve shut down to help protect us.

As many artists,  stores, restaurants, service and gig economy workers, and freelancers have been forced to do, local venues have begun taking to crowdfunding in recent weeks, not only to offset their own costs while unable to host shows, but, in the case of some (particularly larger rooms), to directly support their displaced staff. Please, if you can, if you’re in a financial position to do so, consider donating to help protect some of Nashville’s most important musical spaces at the links below.

All ages, DIY, indie venues like Drkmttr are often overlooked, but absolutely essential in fostering a thriving, creative, inclusive community of artists and show-goers. They run on the lowest of margins and are always a labor of love, organized and maintained by people who understand the importance of these types of spaces. After years in impermanent locations (and a year displaced), Drkmttr settled in a more formal space in East Nashville last year, and it would break our hearts to see it disappear again. They’ve already reached their funding goal, but small venues like this can always use all the help they can get- donate to Drkmttr here.

Like Drkmttr, legendary Rock Block staple The End is an important, often overlooked space that is essential to the young, alternative, up and coming side of the local music scene and burgeoning touring acts (and even plays host to some fairly big bands from time to time- always a treat in such a crammed, punk space). Even before all of this, development in Midtown has been threatening the area’s venues, and losing The End, above all, would be a blow the scrappy, underground side of our local music scene. They still need a lot of help and you can donate to The End here.

Since the old days of East Nashville Underground, The East Room has been a consistently great and important independent venue spaces for an incredible variety of local shows and national artists. Their dedicated staff are integral to our independent music scene, and the venue is raising money to help support them while closed. You can donate to The East Room here.

Though a tad larger than the venues above, the Rock Block’s Exit/In has been a Nashville staple since the early ’70s, and with recent external pressure from pricey development in the area and a growing number of new corporate-backed venues in competition, it was already one of the city’s most vulnerable independent spaces even before all of this. Along with its sister bar space Hurry Back, the Exit/In employs a sizable staff, and they’re asking for donations to help support them. Donate to Exit/In here, and/or consider buying some merch. If you’re holding a ticket to a show that’s being rescheduled, you could also consider not requesting a refund at this time.

Though it’s also a great, rock and roll spirited dive bar in its own right, East Nashville’s The Cobra has also long been a live music staple as well (carrying on the legacy of its former history as fooBAR), hosting shows both in their front bar and dedicated venue space in the back, where we’ve caught some unforgettable nights like Thunderbitch, Mineral, and countless local fests. In an effort to support their staff while closed, they’ve also launched a GoFundMe, and you can donate to The Cobra here.

Five Points staple The 5 Spot had only just re-opened from the tornado before shuttering again due to COVID-19. They book some of the highest frequency of acts of any venue in town, and are going above and beyond in their fundraising, attempting not only to keep the venue afloat and to help pay staff, but also to send money to around 150 acts they’ve had to cancel for the month (hence their hefty funding goal), with the promise that any extra will go to community health charity The Ben Eyestone Fund. You can donate to The 5 Spot here.

Another longtime live music staple, 3rd & Lindsley has played host to a wide variety of small and mid-sized performers over the years, with their Lightning 100-sponsored Sunday showcase, Nashville Sunday Night, a consistent weekend favorite. They’re a bit larger than some of these other spaces, but as an independent venue in a neighborhood being swiftly developed, they need help too- especially with a staff of around 50. To help support their employees, donate to 3rd & Lindsley here.

City Winery is probably bigger and better funded than the other venues on this list, and it’s part of a small chain, rather than a local, independent, single-location venue. We’re including it though, because their venue does employ dozens of people who, like many service industry workers, are totally displaced right now. Their goal is so high because it benefits employees at all of the venue’s more than half a dozen locations, and you can donate to City Winery here.

Gulch situated Rudy’s Jazz Room, another of our city’s great small, independent venues, and the best spot to catch quality jazz every night of the week, is also running a GoFundMe to help cover costs and take care of employees during the closure. You can donate to Rudy’s here.

We’re listing The Basement East last because as far as we can tell, they haven’t formally launched a fundraiser as of yet for the venue or staff in response to COVID-19. In the aftermath of this month’s tornado though, they did launch a donation page which more generally benefits the Community Foundation of Middle Tennessee (an effort that is unfortunately now being eclipsed by more recent events), and they’re selling a t-shirt to benefit the United Way Fund. We’ll update if we seen any specific funding efforts for The Basement or BEast.

If we missed any local venues currently running relief efforts, please let us know in the comments and we’ll update accordingly!