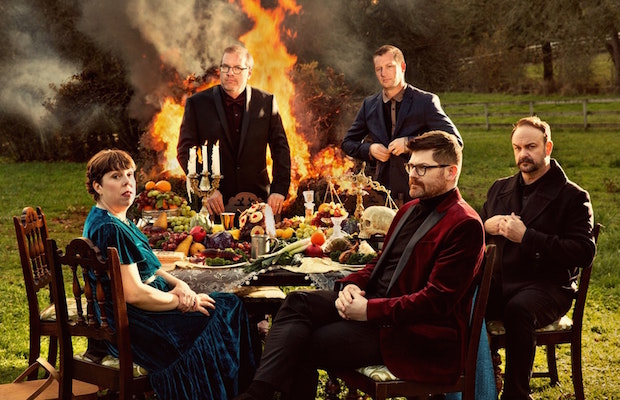 Formed two decades ago in Portland, Oregon, folk and baroque pop soaked indie rock outfit The Decemberists have, over many years, cemented their legacy as one of the smartest, most prolific, most enduring and endearing bands of modern era. Led by bookish troubadour Colin Meloy, the group established a knack for crafting poetic, imaginative, history-referencing, and layered songs with their fan-favorite debut, 2002’s Castaways and Cutouts, and have largely built on that foundation with their numerous EPs and LPs that followed, adopting a wide range of traditionalist instrumentation, wavering been self-reflective and story-driven songs and outright concept albums, and managing to explore new depths of their wide-ranging influences without straying so far as to become unrecognizable. That is, until their 2018 eight album I’ll Be Your Girl, which, save for Meloy’s unmistakable voice, contained several songs you’d be hard-pressed to recognize as The Decemberists, eschewing their typical British folk or Americana informed indie rock base in favor of straight up synth-driven new wave and post-punk, inspired, apparently, by the 2016 elections and the current dismal and weird general state of the world.

No strangers to Nashville, The Decemberists have made regular stops at their apparent Music City venue of choice, The Ryman, over the last several years, but when they return once more this summer, Aug. 22 with fellow long-running indie folk rock faves Fruit Bats it won’t be in support of a new album, but, rather, in celebration of their 20th anniversary. We can only image that that means an even more career-spanning, fan-geared set than usual, and if you’ve seen any one of the group’s numerous Ryman stops, you already know how perfectly suited the Mother Church is to their complex and lush sound. Don’t let the summer date fool ya; tickets are going to sell out quick, so snag ’em here while you can!