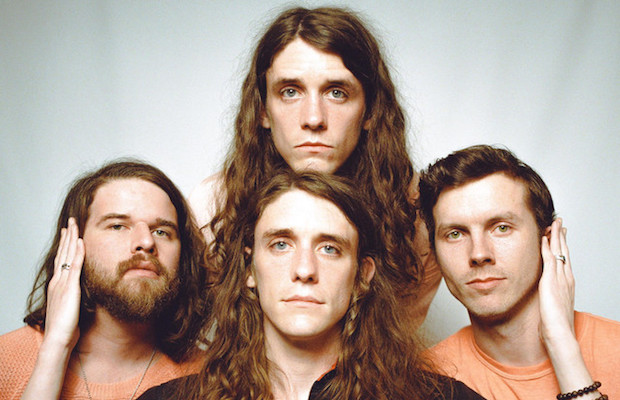 It’s been a minute since we checked in on local southern and garage rock favorites The Weeks, who, leading up to and since the release of their stellar new fourth full-length, Two Moons, earlier this year, have been back on the road, reigniting buzz, and continuing to earn their reputation as one of Nashville’s best, most hardworking bands. Though they make a point to play shows around town semi-regularly, in recent years, the group have increasingly focused on more unique and fan-geared local outings, often performing in more intimate spaces, making surprise appearances under aliases, or centering their shows around special occasions. One occasion that’s apparently long been a Weeks tradition is hosting Christmas shows in their native Mississippi, and while that’s set to again happen with a pair of shows next week, the band are also extending the holiday cheer to their adopted hone of Nashville this year, for a pair of performances tonight, Dec. 12 and tomorrow, Dec. 13, at The Basement East! Thursday’s show features support from breakout psych rockers Sun Seeker and indie rockers Desert Noises (tickets here), while Friday will include support from alt/folk rockers Betcha and indie/psych outfit Keeps (tickets here), all fantastic and all local. And to really make the most of it, a limited number of discounted two-day passes are available here. There seems to be more great shows than usual so late in the year, but if you’re looking to wind down the year (and the decade) with a stacked bill of some of the best performers Nashville has to offer, these shows are hard to beat!

Blending southern rock with garage, alternative, and indie rock sounds, The Weeks started in high school, and produced several early albums before ultimately relocating to Nashville, and, subsequently, signing to Kings of Leon’s Serpents & Snakes record label. Their breakthrough came in the form of 2012 (originally 2011) release, Gutter Gaunt Gangster, with 2013’s Dear Bo Jackson helping expand their critical and commercial presence, and further realize the evolution of their sound. The band found wider buzz with 2014 EP Buttons, and took a healthy amount of time to refocus and meticulously craft 2017’s third full-length, Easy, which firmly pushed the band forward as a mature, cohesive, and confident bit of course correction. The wait for a followup, thankfully, was much swifter, as the band returned this summer with their latest, Two Moons. Out through new label home Crooked Letter Records, the local group’s most recent LP feels like the perfect distillation of everything that came before, a more self-assured, balanced, and contemporary fusion of their indie rock swagger and southern rock roots, resulting in undoubtably one of the best local releases of 2019. Over the years, we’ve seen the group grow from small rooms to festival staple, club headliner, and international touring artist, and we couldn’t be prouder of their success. Eclectic in sound and energetic in their live performance, The Weeks are truly one of the most exciting rock bands to emerge from Nashville in the time our site has existed, and any chance to see them live is always a guaranteed great time. Don’t miss out!