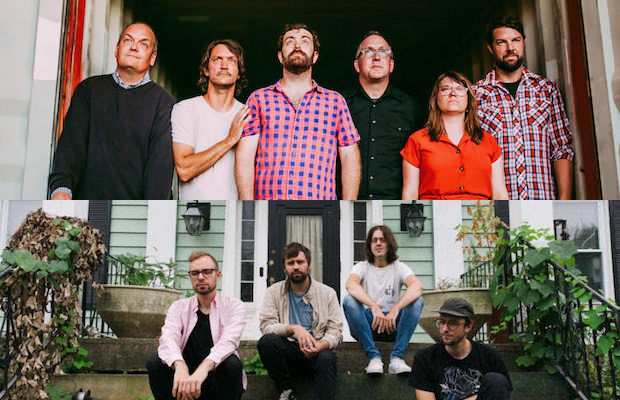 After a few year absence from Nashville (and from making new music), beloved, long-running Omaha emo and post-hardcore outfit Cursive reemerged last year with a new record and a return to Music City, wowing us with a performance last fall at The Basement East. Clearly feeling the creative juices once more, the rockers wasted no time in crafting a followup, dropping their second album in just as many years, Get Fixed, earlier this fall, and continuing to tour in support, bringing them back to Nashville once more for a stop tonight, Nov. 10 at Exit/In, with buzzy indie rock staples and indie legends in the making in their own right, Cloud Nothings, tapped to co-headline the bill! Fellow O.G. emo and indie outfit The Appleseed Cast round out the lineup, making this without a doubt one of our most-anticipated shows of the fall, and tickets are still available here while they last! Read on for more about the show.

It’s been nearly 25 years since emo-tinged indie and post-hardcore outfit Cursive first emerged from the Omaha scene, forged by the same communal, musical upbringing that gave birth to acts like Bright Eyes, The Faint, and many, many other related, interconnected, and lesser-known projects. Though their early years showed promise and achieved regional acclaim, it wasn’t until a short break and return in the late ’90s, after which the band cemented their sound and penchant for crafting concept albums with third LP and critical breakthrough Domestica in 2000, that the Cursive of the past 20 years really found their voice. By 2003’s The Ugly Organ, arguably their best and most-beloved work, the band had attained broad, commercial success, landing in a golden era of smart, substantive, and edgy emo and indie that propelled them to enduring success. While subsequent years have seen intermittent periods of slow-down, side projects (notably, frontman Tim Kasher also crafted a few modern classics with other band The Good Life, along with some solo work, and the rest of the band have similarly ventured off to great affect), and even more recent business ventures (Cursive recently launched their own indie label, and jointly own a bar and venue in Omaha), for the bulk of their run, the band returned, like clockwork, with a new LP every three years throughout the ’00s, all with a unique concept and focus, maintaining their sound while exploring new territory, and still largely garnering praise from fans and critics alike. Last year’s Vitriloa (their first with drummer Clint Schnase in over a decade), however, marked their longest gap between releases, serving as a long-awaited followup to 2012’s I Am Gemini (those same two years mark their most recentl Nashville dates as well). While the aforementioned external obligations certainly played a part, just as influential on Cursive’s latest is the general, chaotic state of the world, which they absorbed, processed, and navigated with a bit less thematic pressure and a palpable sense of patience, leading to a very inspired and impassioned new creative period, which has carried forward to their swiftest followup in 20 years, this fall’s Get Fixed. Distinct from, but in many ways a sonic companion to Vitriola, the band’s latest is another excellent, driving, and fully-realized effort, reminiscent of some of their best material of the early ’00s. Cursive have always been great, but the fact that they’re sounding more nostalgic, urgent, and inspired in their personal, scream-sing, emotional, and dynamic songs than they have in years has us particularly excited for the group’s quick Music City return, and though they’ve been on the road a lot lately, given the intermittent nature of their tour schedule in recent years, we’d urge you not to miss it.

Formed a decade ago, initially as a solo vehicle for frontman Dylan Baldi, acclaimed indie rockers Cloud Nothings were originally just one of many fake band names a then-teenage Baldi used to post music he’d recorded in his parents’ basement while in college, on a variety of MySpace profiles. Gaining the notice of a Brooklyn concert promoter, who invited Cloud Nothings to open a show, Baldi put together a live band and turned his fake project into a real one, soon dropping out a college and doubling down on writing and recording, making his debut with 2009 EP Turning On. Soon landing a deal with Carpark Records, Cloud Nothings’ eponymous debut full-length arrived in 2011, immediately met with widespread acclaim from the tastemaking music press, and opening the door to more frequent tour opportunities, sharing the stage early on with acts like Best Coast, Wavves, and Titus Andronicus. By 2012 sophomore effort Attack on Memory, a more raw and heavy effort helmed by legendary producer Steve Albini, Cloud Nothings had evolved into a proper band, becoming indie darlings with praise from outlets like Pitchfork, and landing on the lineup of major fests like Coachella. Continuing their buzzworthy trajectory, the band’s 2014 effort Here and Nowhere Else earned even more boisterous praise and landed on many a year-end list (including our own), cementing Cloud Nothings’ status as one of indie rock’s greatest new acts. Two more LPs have followed, 2017’s Life Without Sound and last year’s Last Building Burning, all just as great and just as eclectic, weaving from poppy indie to alt rock, with hints of post-punk, post-hardcore, and even emo as a throughline throughout their catalogue. A band just as complex and resonant as Cursive, building their own legacy with just as much prestige, Cloud Nothings are an absolutely inspired pairing for this show, and just as much a reason it should be high on your fall anticipation!

Emerging from the late ’90s midwest emo hotbed of Lawrence, Kansas, The Appleseed Cast clearly took heavy influence from that scene without plugging directly into it (perhaps their SoCal roots, and brief stint in North Carolina helped broaden their sound from some of their more narrowly focused midwestern emo peers), emerging as a seminal act of the emo heyday of two decades ago. Managing critical acclaim for their third and fourth full-lengths, Low Level Owl: Volume I and II, at the start of the millennium, kicking off a buzzy trajectory that cemented their legacy in the ensuing years, the group, like Cursive, became a beloved fixture of the indie rock underground, touring regularly and retaining a DIY ethos, while continuing to release music at a pretty steady clip for more than two decades. Their latest LP, this year’s The Fleeting Light of Impermanence, follows a six year gap since their last, Illumination Ritual, and sounds like a welcome return to form, bridging some of the best parts of the band’s past with a more contemporary and mature approach. Long a dependable staple of the indie/post-rock scene, and a band who’ve surely rubbed elbows with Cursive throughout their entire existence, any O.G. fan of emo and indie from the ’90s and ’00s will already know to be punctual for this one!