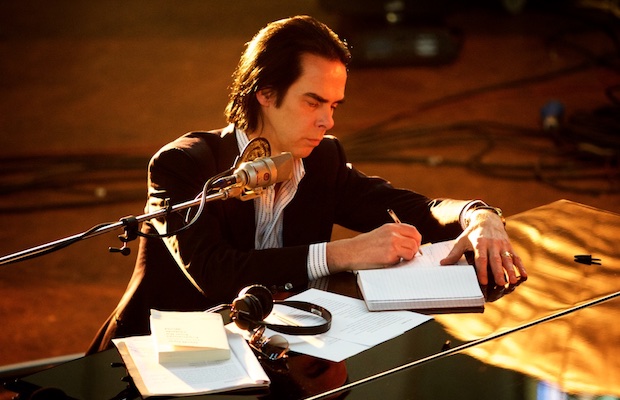 Described as a series of music and open discussion events, as well as an “an exercise in connectivity,” famed Australian alt rock and post-punk artist, author, screenwriter, composer, and actor Nick Cave first debuted his “Conversations with Nick Cave: An Evening of Talk & Music” tour last year, with a handful of stateside shows and a run of global dates, which continue with a lengthy North American run throughout the fall, and brings Cave back to Music City tonight, Oct. 3, for an appearance at TPAC‘s James K. Polk Theater.

While news also came just a few weeks ago of a brand new Nick Cave and The Bad Seeds album, their 17th overall and first in three years, Ghosteen, set to drop tomorrow, Oct. 4, and premiering today live on YouTube at 4 p.m. CDT right here (or at the embed below), the timing is merely a coincidence, as Nick’s TPAC outing will be a much more intimate and career-spanning affair, where the legendary artist will be taking questions from the audience, as well as performing songs on the piano, where “no subject is sacred and audiences are encouraged to be bold and challenging, confrontational and unafraid.”

This unfiltered, unscripted, unconventional, and unmoderated Q&A might not satisfy the casual fan looking for a more typical concert experience (and with a new LP imminent, we hope he’ll return for one of those in the near future), but for the Nick Cave superfan, interested in the man himself and his art and perspective well beyond just his body of music, this sounds like an absolute must-see show. Only a handful of tickets remain right here, so act fast, then stream Ghosteen below, or find it through your preferred listening method tomorrow right here.

Nick Cave will bring his Conversations with Nick Cave: An Evening of Talk & Music tour to TPAC’s James K. Polk Theater tonight, Oct. 3. The show is all ages, begins at 8 p.m., and tickets are available for $61.50.