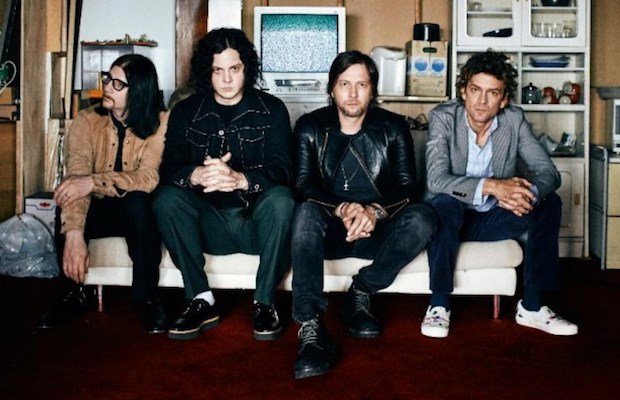 Local supergroup The Raconteurs, made up of Jack White, Brendan Benson, Jack Lawrence, and Patrick Keeler, returned earlier this year with a long-awaited third LP- their first in over a decade- Help Us Stranger, and have steadily been roaring back to life since, first with a hometown return to stage in honor of White’s Third Man Records’ 10th anniversary, and more recently with a string of tour and festival dates.

Notably White’s first post-White Stripes band, after teasing new music off and on for years, at times with the prospect of a return seeming less likely (White has since had a massive solo career, and also juggles time with other side project The Dead Weather, and the other Raconteurs are busy with their respective musical careers as well), The Raconteurs’ latest is a welcome, genuine return to form, picking up the bluesy, psych-tinged alt and garage rock of their first two LPs, 2006’s Broken Boy Soldiers and 2008’s Consolers of the Lonely (which got a deluxe reissue back in December), right where they left off.

While the Third Man block party was the biggest opportunity to see the band’s return (and a pair of Blue Room shows around that time provided an even more intimate, albeit incredibly hard to score tickets for, occasion to see the reunited rockers), a trio of shows at The Ryman Auditorium this Thursday through Saturday, Aug. 29, 30, & 31, announced shortly thereafter, will be a fitting and more conventional affair, bringing the group back to the Mother Church for the first time in eight years.

Unsurprisingly, those Ryman dates sold out immediately, and until now, those who didn’t act fast have been out of luck. However, in a very special surprise announcement this morning, it was revealed that all three shows will be live streamed for free- a rarity for The Ryman- thanks to new streaming partner nugs.net. Beginning at 9 p.m. CDT each evening, tune in at nugs.tv, as well as the band’s YouTube (we’ve embedded those players below) and Facebook channels, to watch their full set for free!

And, if that wasn’t exciting enough, Third Man has also unveiled a new live archive audio program through nugs.net, featuring a treasure trove of classic performances from The Raconteurs, Jack White, The White Stripes, and The Dead Weather, with a dozen available at launch through subscription or a la carte, and new Third Man content added monthly- check it out right here. Again, The Raconteurs live stream will be free at the links above, so if you couldn’t make it The Ryman in person, we encourage you to plan a night in!