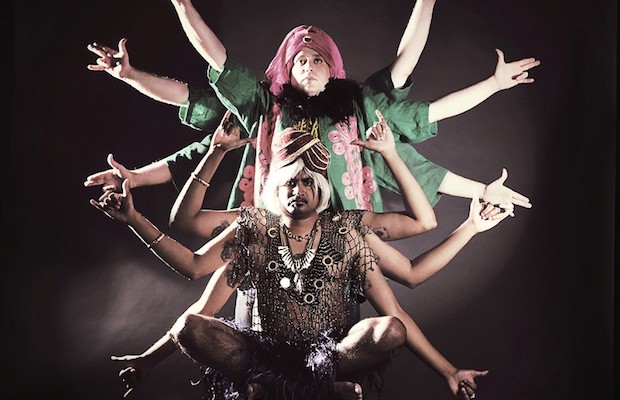 Long-running, cult favorite, seminal doo wop punk duo The King Khan and BBQ Show (featuring garage rock favorite King Khan and fellow Canadian garage punk trailblazer Mark Sultan, a.k.a. BBQ), have been a bit more intermittent in activity in recent years, balancing their respective solo and side projects, while still finding time every few years to record and tour the world. Returning to Nashville for the first time since 2015 (the same year their last LP dropped), the duo are set to headline The Basement East on Aug. 9, with local grungy alt rockers Thelma and the Sleaze, whose sophomore LP Fuck. Marry. Kill. is set to drop later this year, tapped to open. A must-see for fans of unadulterated, riotous rock and roll, tickets are available right here while they last! If you’d rather leave it to chance, however, we’re also giving away a pair of tickets to one lucky fan! Read on for more about the show, and enter for a chance to win below.

We’ve been raving about the wacky, trashy antics and immensely fun and kickass live performance of local grungy, alt rock outfit Thelma and the Sleaze for years, so anytime they play a show, whether it’s somewhere you never expected to see a band like a McDonald’s or laundromat, or somewhere more conventional like a club, we’ll always recommend them. Two years in the making, the band finally released their debut album, Somebody’s Doin Somethin, back in 2017, following a couple of killer EPs, hundreds of tour dates, lineup changes (frontwoman Lauren Gilbert remains the constant), near-breakups, and even an award-winning documentary chronicling a month-long intracity tour. Though they’ve continued to be an important part of Nashville’s underground rock scene, the group have especially ramped up activity lately, with news that their highly-anticipated sophomore LP, dubbed Fuck. Marry. Kill., will arrive later this year, preempted by the release of great new single “Pain.” If you’ve never seen Thelma in action, shame on you, but this is a perfect opportunity, and a stellar choice to open what is a great show from top to bottom. Don’t be late!