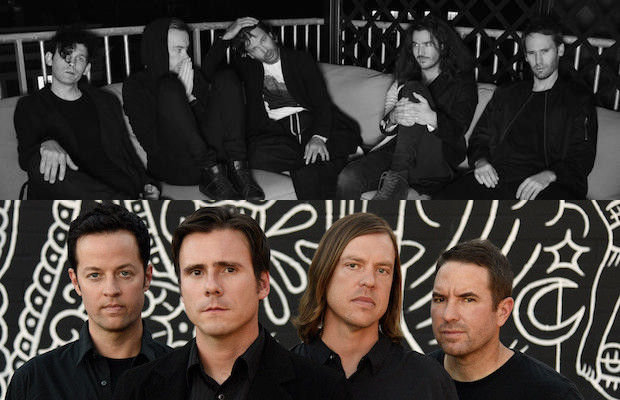 After achieving massive success in the late ’90s and helping user in a new crop of substantive, poppy, genre-bending, and radio primed alt rock, while continuing to prove with release after release that their rise was no fluke, Third Eye Blind have, in more recent years, found a balance between nostalgic and forward-aiming, maintaining a cult following and embracing their career-defining early work. Similarly, Jimmy Eat World, who formed around the same time but wouldn’t find broader mainstream success until the early ’00s, almost single-handedly helped shift mainstream rock towards the emo and indie punk scene, becoming one of the most beloved and iconic bands of their era in the process. Though no strangers to Music City (both have passed through within the last two years), 3EB and JEW are teaming up for a co-headlining Summer Gods Tour, bringing their nostalgic, career-spanning, and hit filled live shows back to Nashville tonight, July 24 at Ascend Amphitheater, with New York indie rock faves Ra Ra Riot, set to drop a stellar new album next month, tapped to open! A killer bill from top to bottom, and certainly one of our most-anticipated shows of the summer, a handful of tickets still remain right here. Snag your spot now, and read on for more about the show!

Famed ’90s alt rock act Third Eye Blind might best be known for their massive, breakout, self-titled 1997 debut LP, but, unlike many of their peers of that era, the group have never faded away, continuing to tour and release music for well over two decades now. Formed in San Francisco in 1993 by frontman Stephan Jenkins and ex-guitrist Kevin Cadogan, the band found themselves the subject of quite a bit of buzz after only a handful of early demos and high-profile performances, igniting a bidding war that would land them on Elektra Records for their debut, which has since been certified six times platinum. Thanks to huge hits like “Semi-Charmed Life,” “Jumper,” and “How It’s Going to Be,” the band became a radio staple and international phenomenon, their success extending to sophomore effort Blue. By the ’00s, the group entered a period of lineup shuffles (Cadogan notoriously was booted on bad terms, as was his subsequent replacement, Tony Fredianelli, a decade later), still managing to tour and release three more strong albums, albeit with longer breaks and periods of dormancy in between. Regarded as a band with stronger songwriting chops and more timeless pop sensibilities than many radio artists of their era, thanks largely to Jenkins, Third Eye Blind have found their sound able to adapt with the times, most recently culminating with surprisingly pleasant 2015 fifth album Dopamine, a callback to their early ’00s sensibilities, and two more recent EPs, We Are Drugs and last year’s Thanks for Everything, continuing to expand their sound. Seemingly uninterested in cashing in on pure nostalgia, the group don’t deny fans of their early work a classic 3EB fix, but, in turn, seem squarely fixated on looking ahead, constantly pushing their musical direction to new relevance. Whether longtime fan or newcomer, tonight’s Music City return promises to be a firm reminder of why Third Eye Blind are one of alt rock’s true great acts.

With over 20 years of beloved and essential releases, few bands have been as important to the emo scene or have maintained as much breakout, immeasurable influence as Jimmy Eat World, who first rose to widespread recognition in the early ’00s (but made a big impact in the underground several years prior). Formed in 1993 in Mesa, Arizona (by a lineup that’s largely remained unchanged), the band came into their own at a time when peers like The Get Up Kids, Mineral, The Promise Ring, and Braid were finding underground cult followings for their substantive, raw, and indie-derived emo sound, but had failed to reach the mainstream recognition of pop punk acts like Green Day. By 1999 third album (and second major label effort) Clarity, Jimmy’s ascent was beginning to look more likely, bolstered by their anthemic, pop primed sensibilities, and with 2001 followup Bleed American, their breakthrough and best known effort, they became a certifiable critical and commercial success, earning constant radio play, music video rotation, chart certifications, and huge tour opportunities. Though musically distinct from pop punks like Blink-182, New Found Glory, and Dashboard Confessional, Jimmy Eat World were, nonetheless, mentioned in the same breath as that scene, which ushered in a dominant stylistic shift in rock that would last throughout the ’00s and influence countless subsequent acts like Paramore and Brand New. 2004’s Futures was, and remains, one of the best modern rock releases of all-time and an emo scene classic, and over four LPs since, most recently 2016’s Integrity Blues, Jimmy have proven every bit the reliable, nuanced, and resonant outfit they’ve always been. Running the range of DIY favorites to true rockstars to reliably famous and fan-geared act, Jimmy Eat World have essentially settled into role of emo elder statesman and ’00s nostalgic faves, appearing increasingly at festivals and touring regularly. Though last year alone saw stops at The Ryman and Live on the Green, it’s always a treat when Jimmy Eat World make it to town!

Formed in 2006 in Syracuse, New York, indie rockers Ra Ra Riot found swift buzz for their energetic, DIY early shows, attracting broader media attention after appearing at New York’s CMJ showcase, and sharing the stage with acts like Bow Wow Wow and The Horrors within months of first coming together. An early and immediate festival fixture, the band’s eponymous 2007 debut EP helped attract a passionate, homegrown following, and landed them a deal with Barsuk Records ahead of their breakout 2008 debut full-length, The Rhumb Line, propelling them to wider acclaim thanks to buzzy tunes like “Dying is Fine.” Hitting at a time in the late ’00s when smart, artsy, hip indie rock was all the rage, the group’s early work took on a notably baroque pop influence, bolstered by a permeant mini string section (now down to only a violinist, Rebecca Zeller, who continues to give the Ra Ra Riot’s sound an original mark), and became even more refined on 2010 sophomore effort, The Orchard. A continued indie favorite and a regular live fixture, Ra Ra Riot have expanded and evolved their sound even more this decade, taking an electronic and sythpop infused turn with 2013’s Beta Love, and working with producer and former member of Vampire Weekend Rostam Batmanglij to achieve a more indie pop geared sound on 2016’s Need Your Light. For their upcoming fifth album, Superbloom, set to arrive Aug. 9, the band once again teamed up with Batmanglij, opting also to bring in more collaborators and shed their preconceived notions of their sound, fully embracing their inherent pop elements for the most eclectic, imaginative, radiant, and ambitious Ra Ra Riot album to date. We’ve long been a fan of their underrated group, and with their latest, it feels like Ra Ra Riot are more energized than they’ve been in years- don’t miss their opening set!