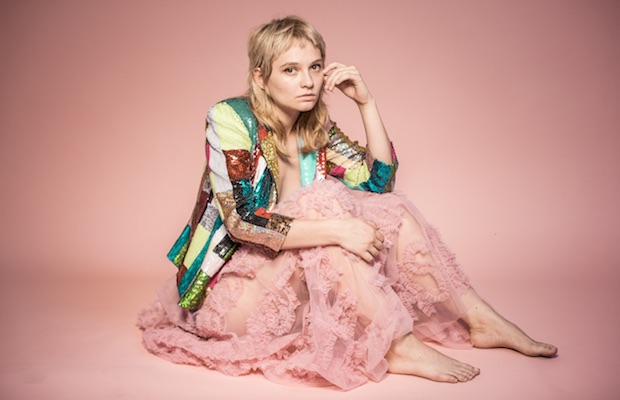 While, often, radius clauses prevent festival acts from performing locally within a certain window on either side of a festival date, we often see exceptions from common promoters or booking partners or the fest itself, especially in the case of small to mid-sized acts. Billed as a sort of pre-Bonnaroo event dubbed the “Glaze Party,” two of the bands we’re most looking forward to this Thursday at Bonnaroo, LA grungy garage pop outfit Cherry Glazerr and New York retro psych/garage rock transplants The Nude Party are stopping in town a little early to play a more intimate co-headlining club show tonight, June 11 at Exit/In! Local faves The Medium have been tapped to support, and tickets are still available here. Whether as a warmup for ‘Roo or a substitution if you’re sitting this year out, this is one seriously cool lineup you don’t want to miss, and you can find out more below!

Helmed by 22 year old frontwoman Clementine Creevy, LA grungy, indie, retro alternative, garage rock and noise pop outfit Cherry Glazerr started as a series of solo, bedroom demos while Creevy was still a young teen, then under the moniker Clembutt, which caught the attention of Burger Records, who subsequently released them as a tape called Papa Cremps. Soon after, Cherry Glazerr became a full-fledged band, and released their scrappy, lo-fi garage punk leaning debut, Haxel Princess, while Clementine, who also began modeling and appearing on acclaimed show Transparent as a member of fictional group Glitterish around the same time, was still in high school. Darlings of the blogosphere, the band have seen a rotating slate of backing players all anchored around Clem, currently made up of drummer Tabor Allen and bassist Devin O’Brien (multi-instrumentalist Sasami Ashworth was also a long fixture of Cherry Glazerr, but departed last year to focus on her burgeoning solo career), and released their sophomore effort and first for current label home Secret Canadian, Apocalipstick, in early 2017.

A more polished, fiery, political, and eclectic LP, Apocalipstick brought the band widespread acclaim and saw them appear at festivals like Coachella, SXSW, Pitchfork and FYF, as well as tour with acts like Slowdive, The Breeders, Foster the People, and Portugal. The Man, positioning them as critical darlings of the indie punk scene, and Creevy a young and impassioned feminist force. Now an established and beloved act, the band’s latest LP, this year’s Stuffed & Ready, their first of the Trump era and Creevy’s first as a 20-something, feels like the logical musical progression from Apocalipstick, however, thematically, takes a more surprising personal turn, for the first time really showcasing Clementine’s own self-doubt, combating her sprawling and honest personal feelings, and navigating her place in the world, all while keeping intact Cherry Glazzer’s signature biting wit, scrappy sarcasm, and punk spirit, polished with a throw-back alt rock vibe and raw poppy sheen. An absolutely electrifying live outfit, Cherry Glazerr are, hands down, one the coolest, most relevant young bands around, and are a must-see at Bonnaroo as well as in a more intimate space like this.

A chance meeting with Black Lips drummer Oakley Munson, who took an interest and became something of a mentor and manger, in 2014 proved to be a huge catalyst for the group, and after Munson produced their first EP, Hot Tub, in 2016, they eventually relocated to his home base in the Catskill Mountains of New York, paying rent and helping out with manual labor while he served as producer for their subsequent eponymous debut, released last year through New West Records. Adopting a soulful, folky, garage forged ’60s psychedelia like a twangier Velvet Underground meets The Rolling Stones, the group definitely give a strong nod to the past, but still keep enough modern sensibilities to feel timeless, landing them widespread acclaim and shows with the likes of legendary performers Arctic Monkeys and Jack White, as well as acts like The Growlers, Ron Gallo, and Sunflower Bean. Their live show has been one of the band’s strongest assets from the start, and we have no doubt this will make for an excellent warmup for one of the coolest rock sets of Bonnaroo weekend.

Forging a psychedelic sound with elements of garage pop, baroque, and mod rock, local rockers The Medium sprung onto the scene just a few years ago, quickly becoming a fixture of local live shows, appearing at DIY events and popping up on bills around town, like our former Acme showcase series. Winning over listeners with some excellent and endearing early lo-fi home demos, and after quite a bit of time on the road, honing their sound and performance chops, the band released their proper debut single just last fall, “Good ol’ Days,” and followed it up this year with “The Groove.” Vibey, excellent live, and one of the coolest acts in the local scene, while they’re not appearing at Bonnaroo this year, The Medium are an inspired choice to kick things off; don’t be late!