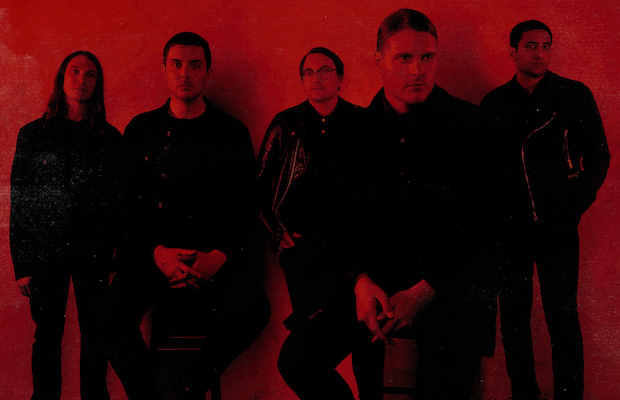 Formed nearly a decade ago in San Francisco by vocalist George Clarke and guitarist Kerry McCoy (and now based in LA), acclaimed, genre-bending outfit Deafheaven found early attention thanks to an untitled, largely DIY first demo in 2010, which they sent around to blogs and eventually caught the attention of Deathwish Inc. with, leading them to sign with the taste-making heavy label ahead of their full-length debut, Roads to Judah, the following year. Met with early buzz, the band expanded their lineup with three new players, and began to tour the globe with acts like Russian Circles, renowned for their artistic, inventive mix of black metal, post-rock, and shoegaze, wrapped up in an intense and alluring approach, inherent charisma, and literary prowess. Ahead of their breakthrough 2013 sophomore LP, Sunbather, however, the band were back down to a duo of just Clarke and Kerry, soon recruiting drummer Daniel Tracy during the recording process, and later expanding with guitarist Shiv Mehra (current bassist Chris Johnson came into the fold a few years later).

Sunbather earned Deafheaven universal acclaim, going on to become the best reviewed major album of 2013 in the U.S., and broadening the group’s reach beyond traditional metal markets, making them something of a trendy and accessible heavy act, and leading to tours with groups like Between the Buried and Me, Pallbearer, Danzig, and No Joy, international tours, and appearances at fests like Fun Fun Fun, SXSW, Pitchfork, Levitation, Wrecking Ball, and even an early spot at Bonnaroo back in 2014. Teaming up again with producer Jack Shirley (who’s helmed every Deafheaven release) and art director Nick Steinhardt, the band’s 2015 third album and first on current label home Anti-, New Bermuda, took a more grounded and heavy turn from Sunbather‘s more melodic and atmospheric style, incorporating classic thrash metal and dark and depressing themes, while still earning widespread acclaim. Deafheaven’s latest, last year’s Ordinary Corrupt Human Love, once again treads new ground, exploring a heavy, elaborate, literary and poetic navigation of desolate romanticism, staying dark and intense while letting seep in bits of shoegaze, classic rock, and psychedelia. Perhaps the heaviest band at Bonnaroo this year, Deafheaven are also without a doubt one of the most artistic and unique, and their late night Friday set is sure to be a standout.