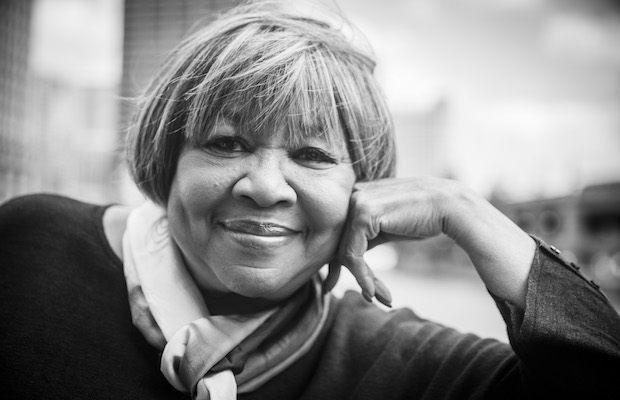 Ahead of her 80th birthday on July 10, legendary Chicago r&b, gospel, and soul singer (not to mention actress and activist) Mavis Staples is performing a trio of star-studded performances, in partnership with Newport Folk Festival (and set to benefit the festival foundation’s support of local music education programs), which kicked off last week in New York and concludes next week in Los Angeles, with a very special middle stop happening tonight, May 15 at The Ryman Auditorium.

With crossover guest spots, high-profile appearances, and well-deserved accolades, Staples has been experiencing a lot of extra attention lately. Her career spans all the way back to the 1950s, rising to prominence with her family group The Staple Sisters, but younger listeners might be more dialed into her recent work with fellow Chicago artist Jeff Tweedy, Gorillaz collaborations, or any variety of the contemporary artists who’ve cited her influence. Not just an icon, Staples’ history as an outspoken civil rights activist also feels especially well-timed, given our current political and social climate.

Though she’s made more recent appearances at nearby fests like Bonnaroo and and Pilgrimage, and last played Nashville proper opening for Bob Dylan in 2016, it’s been years since Mavis last headlined in Music City, making tonight all the more special. And while Staples alone would be worth a trek to the Mother Church, the “friends” part of “Mavis & Friends” seriously delivers, with special guests Jason Isbell, John Prine, Langhorne Slim, Luther Dickinson, Marty Stuart, Nick Lowe, Nicole Atkins, Phil Cook, The Lone Bellow, The Milk Carton Kids, The War and Treaty, Wynonna,  and more are slated to appear. Just a handful of tickets still remain, and you can get them right here!

Mavis Staples and friends will perform tonight, May 15 at The Ryman Auditorium. The show is all ages, begins at 7:30 p.m., and tickets are available to purchase for $45.