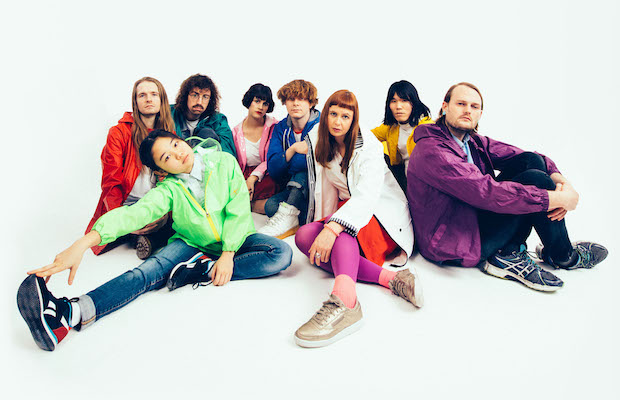 Eclectic, conceptual, and truly global, breakout art pop collective Superorganism are based in London (they even all share a house on the East End), but are made up of members from England, Japan, South Korea, Australia, and New Zealand. Half of the band perviously played in New Zealand indie pop outfit The Eversons, largely meeting the rest of what would become Superorganism over the years through mutual friends and online forums. In the case of young vocalist Orono Noguchi, The Eversons met and befriended her while on tour in Japan, later reaching out to her in 2017 and asking her to add lyrics and vocals to a demo upon learning she could sing, sparking the genesis for the supersized band, in which members serve both musical visual art functions, adding production, video content, background dancing, painting, staging, and other various artistic endeavors on top of conventional writing, recording, and performing.

Superorganism released their eponymous debut last year through Domino, and with their synth-drenched, artsy, bright, and poppy indie stylings, have become a swift success, breaking out especially with oft-playlisted tune “Everybody Wants to Be Famous,” and even contributing a tune to this year’s Lego Move 2 soundtrack. It should come as no surprise that the visual heavy, artistically meticulous band have crafted a stunning, immersive live show, and you can catch it in person tonight, May 15, when they perform Music City for the first time ever at Exit/In. Richmond, VA underground rapper Simpson opens up (and definitely warrants punctuality), you can still get tickets here!