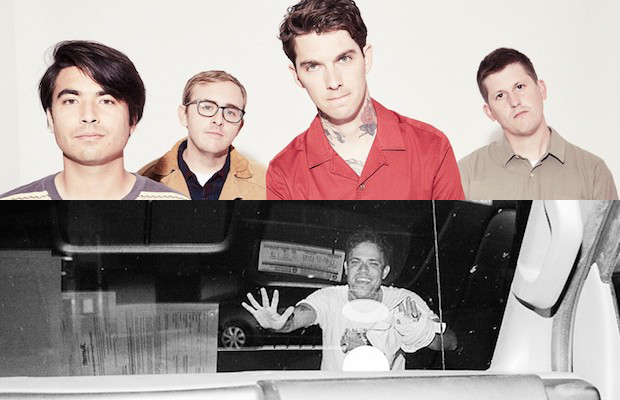 Not planning on watching the Super Bowl today, or looking for something fun to do after? And/or are you a fan of earnest indie punk and emo music? It’s a relatively slow Sunday night in Nashville for shows, but The Basement East is boasting quite of stacked lineup, with California’s Joyce Manor and New York’s Jeff Rosenstock heading up the bill, and buzzy Philly act Remember Sports opening things up! We’d recommend any one of these bands on their own, but all three together make for one seriously stellar show. Game day plans or not, grab tickets here tonight make way to The BEast tonight, Feb. 3, to celebrate your team’s win, mourn their loss, or forget about football entirely with a must-see punk show!

Since forming in 2008, Torrance, California’s Joyce Manor have, like many of their peers in the new punk scene, managed to achieve both organic, indie punk authenticity and broader critical recognition from outlets too “cool” to cover anything that might be labeled pop punk or emo just a few short years ago (that “emo revival” is really just a revival in interest; the bands never left). Over five fantastic full-lengths, including last year’s most recent, particularly stellar effort Million Dollars to Kill Me, the band have honed a knack for crafting driving, loud, resonant punk songs about heartbreak, loneliness, drunken nights, and broken homes, winning over fans and critics with their genre-bending sound and raw honesty. Influenced as much by artists like Weezer and Morrissey as by ’90s emo, early ’00s pop punk, and contemporary indie punk scene peers, Joyce Manor are a live force to be reckoned with, forging a reputation that’s made them not only a punk favorite, but a critical darling who’ve graces stages at discerning spaces like Third Man Records.

While he only formally kicked off his solo career in 2012, Long Island born punk lifer Jeff Rosentock has been a staple in the punk, indie, and ska scene for nearly 25 years, cutting his teeth in early projects like ska outfit The Arrogant Sons of Bitches in the ’90s, and punk collective Bomb the Music Industry! in the ’00s, as well as Pegasuses-XL and Kudrow, before forging a catalogue under his own name, honing an earnest, working man’s punk sound. A lifelong proponent of the DIY scene, and founder of labels like Quote Unqoute and Really Records, as well as producer for efforts by  Mikey Erg, The Smith Street Band, Laura Stevenson, and Dan Andriano, Rosenstock remains a prolific and beloved underground fixture, continuing to release solo efforts, most recently last year’s phenomenal POST-, as well as collaborate in buzzy teamups like ska punk supergroup The Bruce Lee Band and Antarctigo Vespucci, his power pop duo with Fake Problems frontman Chris Farren.

And opening things up and boasting an energetic, poppy flavor of punk, Remember Sports, formerly called Sports, formed while all students at Kenyon College in Ohio, and self-released their first full-length, Sunchokes, in 2014. After drumming up buzz and landing on Father/Daughter Records, they crafted a followup, All of Somehting, in 2015, further honing their earnest, emo-tinged indie punk sound. After finishing school around their sophomore effort and being scattered about, the future of band, now based in Philly, had a bit of uncertainty, but after regrouping, and tweaking their lineup (and their name), the band returned last year with an excellent third LP, Slow Buzz, and have been touring once more at a steady clip. Fans of earnest indie, punk, and emo will love this lineup top to bottom, and even if your plans today include the Super Bowl, we’d really urge you to be punctual!

Joyce Manor, Jeff Rosenstock, and Remember Sports will perform tonight, Feb. 3 at The Basement East. The show is 18+, begins at 8 p.m. (doors at 7 p.m.), and tickets are available to purchase for $23.