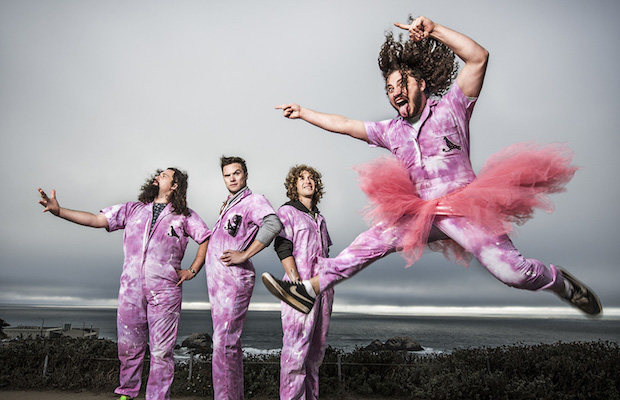 Fiercely independent and commanding a cult following, Baltimore psych-tinged, high-energy, electro-funk outfit Pigeons Playing Ping Pong are a must-see for any fan of positive and vibey jam bands. Still touring relentlessly in support of last year’s great LP Pizazz, the group are set to return to Music City for the third year in a row, this time to headline not one, but two nights at The Basement East, Dec. 27 & 28. While the latter, with Colorado breakouts Magic Beans, managed to sell out in advance, some tickets still remain for the Dec. 27 show, which features Bay Area jam rockers Midnight North in the opening spot, right here (previously available two-night passes are also sold out).  Even better? We’re giving away a pair of tickets to the Dec. 27 show as well! Read on for more about the performers, and enter for a chance to win below.

Formed nearly a decade ago while attending the University of Maryland, electro-funk/jam outfit Pigeons Playing Ping Pong have been cultivating a cult following since first exploding onto the scene with their 2010 debut, Funk E P. In the years since, the band have toured nearly non-stop, often performing upwards of 200 shows a year on their unending quest for joy and positive energy, churning out several more well-received LPs along the way, becoming festival fixtures (and founding their own fest, Domefest), and earning a killer reputation for their engaging, uplifting, dance ready and guitar heavy live shows, dubbing their loyal following The Flock as they’ve ascended up the jam band ranks. Their latest record, last year’s Pizazz, self-released as always, perfectly distills the band’s live energy, unpredictably, groovy funk aesthetic, and tight jam sensibilities, providing a perfect followup to fan-favorite 2016 effort Pleasure, and finally putting to tape some tunes that’ve been a fixture in their live show. As with any band in the jam sphere, Pigeons are, of course, meant to be experienced live to be properly appreciated, and with their modern aesthetic, fun and lighthearted on-stage antics, polished and vibey presentation, and impressive catalogue, a chance to see them in an intimate room like The Basement East is one no fan would want to pass up!

Still riding the buzz for their acclaimed 2017 third album Under the Lights, San Francisco jam/folk rock outfit Midnight North have more or less been touring nonstop since their 2015 effort, Scarlet Skies, crafting Lights (as well as a live album the year prior) while on the road refining their sound and show. Co-fronted by Elliott Peck and Grahame Lesh, the son of the great Phil Lesh, the band have been praised for their electrifying performance, and are steadily becoming a festival fixture, making them a natural pairing for this show, and a band The Flock are all but guaranteed to love. Show up early and soak up all the vibes!

Enter to win tickets to the Dec. 27 show (note: valid for the Thursday show only, and non-transferable to Friday) by filling out the form below. Must be 18+ to attend. If you experience any trouble with the contest widget, or have any questions, feel free to email us at [email protected].

Winner will be announced Thursday, Dec. 27 at 8 a.m. CST, and will receive one pair of tickets. Good luck!