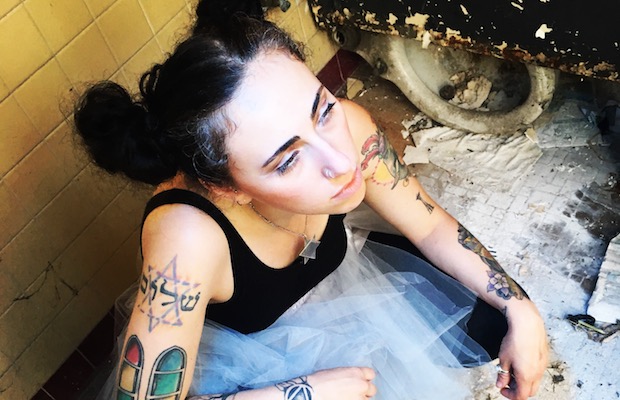 Self-described as “a pop experiment gone very right,” new local duo Srry Abt Yr Butt is a team up between producer Gregory Lattimer (Albert Hammond Jr., Aaron Lee Tasjan, *repeat repeat) and musician Samantha Frances, who fronts long-running site favorite project Frances & the Foundation. The result of writing together for fun as a no pressure creative outlet, Srry Abt Yr Butt channel a sound reminiscent of the ‘90s riot grrrl scene, and their first single, “Welcome to the USA,” balances a fun, pop accessible sound with biting political critique on the current state of America.

Just in time for tomorrow’s monumentally important midterm election, we’re excited to help premiere the brand new music video for Srry Abt Yr Butt’s debut; watch it right now below! “We really just write about whatever is on our minds, and lately it has been about social justice issues,” Frances explains, adding in a release that the project is “almost an alter ego sent down from the cloud storage of their brains.”

Though the beats are catchy and the tune dance worthy, the message is much more serious. Frances sings about the U.S. prison system and current immigration issues in “Welcome the the USA,” name-checking figures from the news who’ve recently called the police on innocent African Americans, reciting incarceration stats, and pointing out the hypocrisy of a country promising a “land of the free” while systemically oppressing members of its populace; all with a delivery that would make Kathleen Hanna proud.

With plans to release a new video and single about every six weeks, and a live show that’ll soon be ready to debut, we expect to hear a lot more from Srry Abt Yr Butt in 2019. Given the state of the world, it’s always great and incredibly important to see new bands take on a platform of speaking out for social and political causes, and if the message of Srry Abt Yr Butt’s debut resonates just as passionately with you, we urge you to get out and vote tomorrow!

Tags: Nashville Muisc BlogPremiereSrry Abt Ur ButtWelcome to the USA