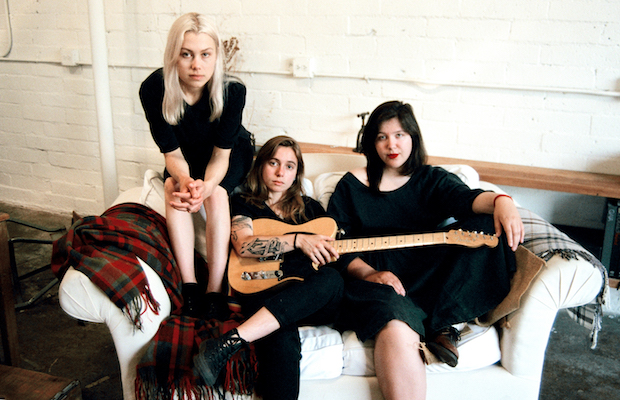 Three young artists making some of the best music in the world right now, who all share similarly earnest, sad, story-driven sensibilities, and a knack for crafting sparse, resonant, folk and indie infused songs, Julien Baker, Phoebe Bridgers, and Lucy Dacus all sprung onto the national scene roughly around the same time, and while each approach their craft with a definite sense of individuality and unique personality (how could they not, making music so raw and authentic), the compatibility of their style, approach, and personality was apparently not lost on each other, since, earlier this year, the trio came together to form a supergroup, boygenius, and to craft an  incredible, eponymous debut EP. It’s important to stress that their current tour (both Bridgers and Dacus have toured with Baker before, but never all three together), which features Julien and Phoebe as co-headliners and Lucy as opener, is not technically a boygenius tour, with each artist, all who’ve released new LPs in the past year, slated to play full sets, but we can all but guarantee that’ll jam on some boygenius tunes together. The run, one of the best tour lineups of the year, kicks off tonight, Nov. 4 at The Ryman Auditorium, a homecoming of sorts for Baker, and her largest Nashville headliner yet. Tickets to this must-see show are still available here, and if you need any extra convincing on why you don’t want to miss it, read on for more about this unbelievable trio of artists!

If you’re dialed into the indie scene, then you’ve very likely heard of buzzworthy breakout singer Julien Baker, whose sprawling, sad full-length debut, Sprained Ankle, was ranked among 2015’s best releases (and for good reason; it’s incredible). What you might not know, however, is that Baker is local, or at least local-ish. Raised in Memphis, the 23-year-old singer-songwriter relocated to Murfreesboro to attend MTSU a few years back, and cut her teeth in the Nashville scene fronting the group Forrister (formerly The Star Killers), who we frequently wrote about in recent years when they often served as support for under the radar emo, indie, and pop punk shows. Since stepping out on her own, after pursuing a new crop of songs she didn’t feel were good fit for the band, Julien has been met with widespread critical acclaim. She recorded her first solo LP with Michael Hegner at Matthew E. White’s Spacebomb Studios in Richmond, VA, the same place follow former MTSU student and long-time Nashvillian Natalie Prass crafted her eponymous debut, in the summer of 2014. Upon its release, Baker was subject to unprecedented, glowing praise from all realms of national press, soon finding herself on prominent festival lineups, television appearances, and on bigger and bigger stages, often with the likes of huge names like Ben Gibbard, The Decemberists, Frightened Rabbit, Conor Oberst, Belle & Sebastian, and Paramore. Baker’s sophomore LP and first for Matador Records, last year’s Turn Out the Lights, is every bit the emotionally resonant, sparse, nuanced, and gut-wrenching masterpiece of predecessor, treading the waters between a punk and emo upbringing and a penchant for crafting deconstructed, lyrically-driven, slow-burn compositions that are equally beautiful and devastating. Songwriters will the talent of Julien Baker only emerge a couple of times in a generation, and her return to the place where she kicked off this chapter of her career, for her biggest headlining Nashville show yet, is without a doubt one of the year’s most important events.

Los Angeles native Phoebe Bridgers channels a similar sort of sparse, sad, folk and indie infused sound to Baker, and, over the past few years, the 24 year old has also been met with widespread critical accolades, and a fast-growing and enthusiastic fanbase. Encouraged to indulge in music from a young age, Bridgers studied at Los Angeles County High School for the Arts, and, after discovering the music of Elliott Smith, began crafting her own brand of story-driven, confessional, smart, and deeply melancholy music. A few years ago, she caught the ear of fellow LA native Ryan Adams, who recorded and released Phoebe’s first three-song 7″, Killers, in 2015. Met with immediate buzz, Phoebe soon found herself on the road with none other than Baker, as well as big names like Conor Oberst (who would later sing on her debut record), eventually nabbing a deal with Dead Oceans, and crafting her first full-length, last year’s Stranger in the Alps, with producers Tony Berg and Ethan Gruska. A gorgeous, personal, sprawling, and emotionally nuanced effort, Alps‘ songs deal with heartbreak, mortality, frustration, and obsession in painstakingly honest and resonant ways, giving Phoebe the sustained reputation of penning incredibly sad songs (not unlike her idol Elliott Smith, or Baker). However, there’s a definite undercurrent of humor, sarcasm, and lightheartedness to Bridgers’ work too, which helps her feel like an artist with a gift for conveying specific emotional moods, while still existing as a three-dimensional person outside of her work. Over the last year, Phoebe has swiftly seen her visibility rise (Alps landed on countless best of lists, and deservedly so), and, like Julien and Lucy, she’s one of the most singularly talented, important, and gifted new artists making music today, and one with a long and exciting career ahead of her, sure to go down as an all-time great.

Raised in the suburbs of Richmond, Virginia, and formerly a film student at the city’s Virginia Commonwealth University- she dropped out to pursue music- Lucy Dacus adopts a breezy, introspective indie rock that we absolutely can’t get enough of. Though a bit more indie leaning and full band-geared, Dacus with her raw earnestness definitely channels Julien and Phoebe, and, aside from the fact that she and Julien are now both signed to Matador, it’s a funny coincidence that Baker, a former Nashvillian, recorded her debut LP in Richmond, while Dacus, a Richmonder, cut hers in Nashville. Lucy’s debut, No Burden, dropped in early 2016, and was re-issued and given a physical release that fall through Matador. In the subsequent year, Dacus and her band seemingly toured nonstop, peddling her smart, worldly, personal songs and pleasant, laid back, and enthralling musical aesthetic to increasingly bigger shows and festival stops. Earlier this year, Lucy returned with her sophomore effort, Historian, a definite album of the year contender and a more honed, resonant, and earnest evolution of her style, which was immediately met with critical acclaim. She might not be quite the same level of household name yet, but Lucy Dacus, like the rest of the bill, is an essential and incredible artist to know; be sure to show up early to see what she’s all about!

Julien Baker, Phoebe Bridgers, and Lucy Dacus will perform tonight, Nov. 4 at The Ryman Auditorium. The show is all ages, begins at 7:30 p.m., and tickets are available for $30-35.