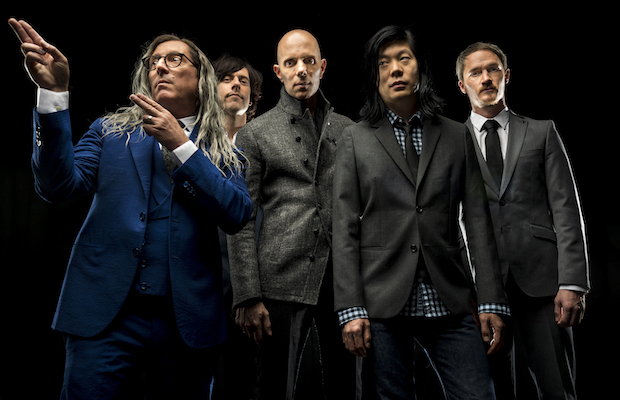 After bringing both alt metal titans Tool and weirder alt/experimental project Puscifer to town in recent years, and appearing solo at City Winery in support of his memoir, eclectic (and incredibly busy) rocker Maynard James Keenan is back tonight, Nov. 2 at Bridgestone Arena with his alt/hard rock supergroup A Perfect Circle for the second year in a row, a continuation of their first tour in several years, and a quick Nashville return, as last time marked their first Music City outing in 16 years

Formed by Keenan and guitarist Billy Howerdel in 1999, the rest of the lineup has rotated over the years, but has always remained impressive, currently boasting bassist Matt McJunkins and drummer Jeff Friedl (Puscifer, Ashes Divide), as well as ex-Smashing Pumpkins guitarist James Iha. Last time around, A Perfect Circle hadn’t released any new music since 2004’s Emotive, but after the first leg of the tour managed to spark the creative juices necessary to craft a long-overdue followup, the band dropped their long-awaited fourth album, Eat the Elephant, earlier this year, giving them all the more reason to keep playing live, and ensuring fresh tunes this time around.

Opening the show is acclaimed English rapper, trip hop pioneer, and former collaborator of beloved acts like Massive Attack, Tricky, as well as LA goth-y electronic duo Night Wave, both all but guaranteed to resonate with APC fans. With new music as an excuse, we’re not too shocked to see the band return so soon, but given how how busy Keenan’s schedule always seems to become, we wouldn’t necessarily count on a return date any time soon; grab one of the few remaining tickets right here, or prepare for some extreme FOMO.

A Perfect Circle, Tricky, and Night Club will perform tonight, Nov. 2 at Bridgestone Arena. The show is all ages, begins at 8 p.m., and tickets are available to purchase for $54-64.