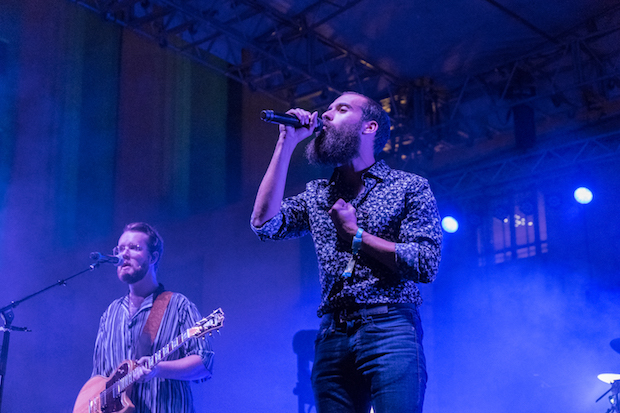 LOTG wraps this week with an epic three-day affair extending across two stages Thursday, Friday, and Saturday, with performers like Jimmy Eat World, Dr. Dog, X Ambassadors, Matt and Kim, The Wild Feathers, Lissie, Savannah Conley, and Natalie Prass to look forward to, but, before we preview the exciting weekend ahead, take a look at our recap and photos from week three below!

It was my first LOTG of the year, and it felt like visiting an old friend.  I wandered up around 5:30 to see a few folks milling about in a soon to be crowded Public Square Park, as I perused through the awesome selection of food and craft vendors.  Unlike the past few events, last Thursday was an awesome, below average weather evening in Nashville with the temperatures in the low 80s with low humidity. It reminded me of the first few years of the event, when it ran much longer into September, as I reminisced to LOTG evenings in hoodies and jeans. I gathered my credentials and set up shop for the opener and loooong time friends of the blog, Alanna Royale. 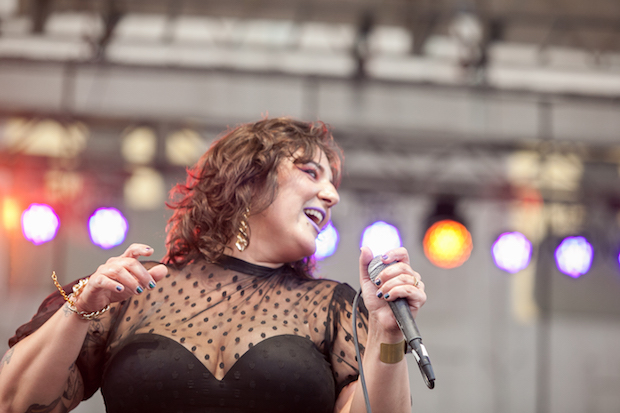 We’ve been fans of Alanna Royale since their humble (yeah, right) beginnings here in Nashville, and have watched frontwoman Alanna Quinn-Broadus and her talented band grow from breakout local success story to a relentless touring machine. We first got to know the soulful sounds and uber powerful vocals in 2013’s debut EP, Bless Her Heart, and stayed tuned through their followup full-length, Achilles, in 2014. They’ve returned this year with their latest record, So Bad You Can Taste It, and really showcased those new tunes during their Live On The Green set. It was the first time that I have seen Alanna Royale since their latest release, and it shows why the band spent a few years working on it. The sound is really fleshed out, including keys and background vocalists to compliment their always vibrant sound.  It also gives Quinn-Broadus the ability to really showcase her powerhouse vocals rather than trying to carry the whole load.

In talking with some of the band after the set, it was awesome to hear how happy they are with the new record, and it definitely showed in their incredible set to kick off LOTG. If you haven’t heard So Bad You Can Taste It yet, go ahead and dig in right here. And if you somehow read this blog and haven’t seen Alanna Royale live yet, then mark your calendar now for Sept. 28, when they’re set to play a sure to be killer show at Exit/In. 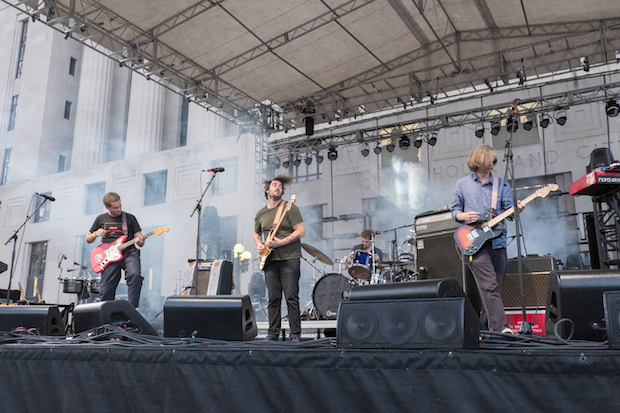 When this year’s lineup was announced, Parquet Courts were the first band that I circled as a must see. I’ve been a fan of the band since their debut LP, Light Up Gold, released in 2012, and have jumped at most opportunities to see the garage punks since that release, including their Nashville debut at The Owl Farm (RIP), a 2013 SXSW house show (that I was probably too intoxicated to actually have attended), and their epic Blue Room set at Third Man Records (man, that black and blue vinyl took forever to release!). Their trips through Nashville have become more frequent since, as the band have been unbelievably prolific releasing new records practically every year (and sometimes two per year), but this LOTG set had me excited for my first chance to hear live cuts from their latest, Danger Mouse produced, record, Wide Awake!

I did a bit of a double take at the set time, as it seems a little strange to watch a garage punk act as the sun is going down.  That didn’t phase Parquet Courts though, and they ripped through over half of the new record for the ever growing crowd. Some highlights of the new songs included “Almost Had To Start A Fight / In and Out of Patience,” set opener “Total Football,” and the crowd mover “Wide Awake.” Of course, the band also captivated long-time fans with some classics like “One Man No City,” “Light Up Gold II,” and seminal hit “Borrowed Time.”  By the end, I wasn’t sure that the now-swelling Rainbow Kitten Surprise crowd fully appreciated Parquet Courts, but I knew, regardless of what the rest of the night held, that I was leaving satisfied. 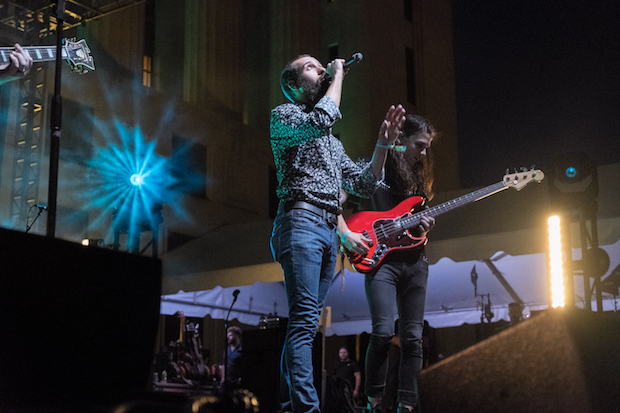 Let me jump on the bandwagon…  I’ve been hearing about Rainbow Kitten Surprise from music industry folks for the past few years, and I caught most of their set at Bonnaroo a couple of years ago. I’ve also watched them play Nashville quite a bit, selling out one venue after the other, often with only a couple of months between shows.  While I’ve had a great time when I saw them and I enjoy their music, I wouldn’t call myself a big fan. Apparently, I’m one of the few that subjectively feel that way. When it came time for RKS to take the stage, the now capacity crowd was on their feet, and surging towards the front, and a roar over took the urban park when the band came on. I sometime wonder at my ripe old age of (*cough*) that my musical tastes are skewing from younger music fans, and I was joking to colleagues that this response to a band that I still viewed as a smaller club sized act was evidence that my suspicions were correct.

Their varied set included tracks from their latest release, How To: Friend, Love, Freefall, and I was pleasantly surprised that I knew far more of that record than I would have thought… a testament to the group’s reach these days. Of course, they also included hits from their previous two records, including “Cocaine Jesus,” “Fever Pitch,” and the undeniably catchy first single “Devil Like Me.”  While the music was impressive, the real catch of the live RKS experience is watching frontman Sam Melo takes on a Mick Jagger or Matt Schultz-esque persona on stage, pouring every ounce of energy he has into delivering an exciting show. He bounced, sprawled, and pirouetted across the stage to the shrieking female (and male) component of the crowd. RKS are only still on the rise, and if you want a taste of why rock music isn’t dead, make sure you keep up with their tour schedule, and find a date to catch these guys live. 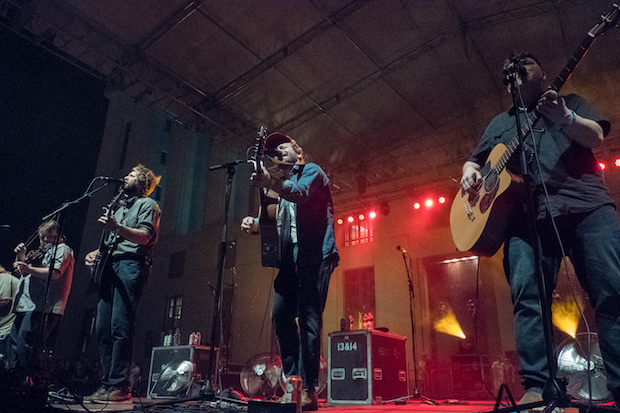 After the high energy spectacle of Rainbow Kitten Surprise, I kinda felt bad for Trampled By Turtles. Though, high energy in their own right, I was wondering if they would be performing to a thinning crowd, either due to half the crowd’s favorite band finishing up or just due to sheer fan exhaustion. Not to worry though, TBT are seasoned veterans, and have a live set that was totally up to task to finish off an epic week of Live On The Green. For those that aren’t familiar, these guys are master musicians who riff through their heavily bluegrass inspired folk with a panache that is unrivaled, and their vocal harmonies play perfectly in concert.  The band are out touring in support of their latest record, Life Is Good On The Open Road, and shared a number of new tracks with the still sizable and cheering crowd.

As my energy level was starting to wane after a long week and a full night of music, I found myself sitting on a perch near VIP watching the crowd cheering and dancing to the playful tunes, and thinking back to Live On The Green’s past. One new friend I met that night was a Nashville newbie, and said “Live On The Green is one of the most amazing things I’ve ever seen.  It’s a free music festival every week!” While there may have been a few beers in my new friend, his enthusiasm was absolutely warranted, because, for those of us that have been around Nashville for a while, it’s easy to forget just how amazing our local music scene is. As I stood watching a humongous crowd of fans, filled with love and joy, I thought back to some of my favorite Live On The Green experiences, and it was a fresh reminder of why I started loving music in the first place.

Live on the Green continues this Thursday, Aug, 30, to kick off the three day finale running through Saturday Sept. 1, with an outstanding lineup including Jimmy Eat World, Dr. Dog, X Ambassadors, Matt and Kim, Natalie Prass, and more. Keep an eye out for a full preview later this week. And, as always, head to LOTG’s site for more info.