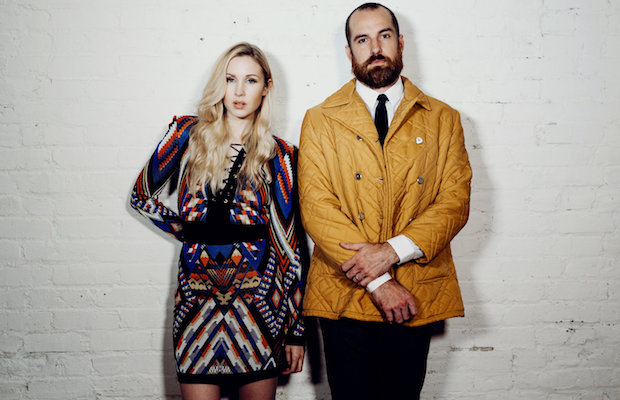 What began as a sort of solo/side project for stellar singer and multi-instrumentalist Stacy King, towards the end of her time with famed former group (and sibling act) Eisely, Sucré has, every few years, seemingly gone through a creative, sonic, and personnel revision, landing on the stylish, layered, electro-laced sound they’ve recently adopted.

Sucré’s gorgeous debut LP, A Minor Bird, dropped in 2012, around the same time the group began to perform live, at the time adopting a dreamy, enveloping indie pop sound not dissimilar from Eisely, but funneled through Stacy’s individual sensibilities. Her husband, drummer/producer/multi-instrumentalist Darren King, and producer/arranger/multi-instrumentalist Jeremy Larson were integral in crafting this early work, and the project, perhaps not formally defined as a “band” yet, appeared to be a collaboration between the three.

By 2014, when last we saw Sucré play Nashville, Stacy’s time in Eisely had all but come to an end, and Sucré had been repositioned as something more of a solo project, with King and Larson’s work relegated to the studio with followup EP Loner, an effort that began to explore electronic elements, layered production, and lavish symphonic arrangements, and a new backing band was recruited for live dates.

Nashville based now for several years, Sucré sprung back to life earlier this year as a husband-wife duo of the Kings, both lending their production and multi-instrumental sensibilities to a sound awash with huge beats, electronic flourishes, meticulous production, genre-bending arrangements, and gorgeous hooks. A natural evolution of what’s come before, Sucré feels, for the first time, like a musical endeavor with its own identity, and is definitely the best its ever been, primed now more than ever to resonate on a mainstream level thanks to a series of incredible new singles in recent months.

Like Stacy, Darren King also found fame with a prior project, in his case, beloved alt rock outfit MUTEMATH, and, since departing the group last year after a 15 year stint, has been working hard to carve out his own artistic identity. Over the years, King has branched out into production, working with artists as diverse as Say Anything and Kanye West, and, in addition to drumming, flexes his skills as a DJ and multi-instrumentalist. Combining these various skillsets, he began last year performing solo shows under the moniker DK The Drummer, an endeavor which has continued to evolve and attract attention since.

Known for his unparalleled and bombastic playing style, participatory antics, and more involved musicianship than most any other drummer, Darren, as DK The Drummer, has developed a DJ meets live band experience, where he meticulously arranges samples, remixes, production, and multimedia visuals, synced up to what amounts to the coolest extended drum solo you can imagine. We witnessed one of the earliest shows last year in Nashville, and were blown away, and can only imagine how much the experience has evolved as DK The Drummer has continued to perform, tweak, craft original material, and grow as a producer,

At this point the Kings, who rightfully count as local artists but don’t get enough attention as such (Darren’s Nashville roots trace back to even his pre-MUTEMATH days), are making some of the most interesting, unique, and essential music in town, which only gets more incredible with their immersive, unrivaled live shows. Both Sucré AND DK The Drummer are set to perform tonight, Aug. 3 at The Basement East, the first Nashville date for either act this year. We can’t stress enough how cool this is going to be, whether you’re familiar with their work or not, so grab tickets here, or check out the videos below if you need any extra convincing!