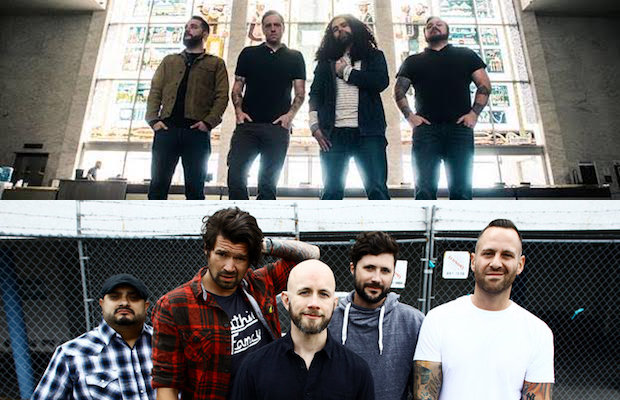 Two excellent, enduring acts who spring out of the punk and emo world, but never quite fit either label (especially now in their later years), progressive rock weirdos Coheed and Cambria and emo/alt rock icons Taking Back Sunday return to town tonight, July 11 for a co-headlining outing at Ascend Amphitheater! Both groups are no strangers to Music City, but their combined appeal (which is certainly distinct, but complimentary) nets them a larger show than normal, albeit a venue more sonically appealing than some of the boomier club spots they’ve hit in the past. Along with breakout pop punk up and comers The Story So Far, this is looking like a top summer pick for O.G. emo fans, and fans of proggy, shred-tastic, sci-fi rock alike. Tickets are still available and decently affordable, so read on for more on why this is a must-see outing!

Hailing from upstate New York, Coheed and Cambria‘s origins can be traced back two decades, when their pre-Coheed project Shabütie formed in 1995, eventually laying the groundwork and forging the sound that would help propel their explosive debut as C&C, The Second Stage Turbine Blade, to critical indie acclaim in the early ’00s. At first adopting a more conventional post-hardcore sound, Coheed quickly became more experimental, and after the breakout success of their fan-favorite sophomore effort In Keeping Secrets of Silent Earth: 3, the band jumped to the major label world and fully embraced their classic rock, progressive, and metal tendencies, with commercial smash Good Apollo I’m Burning Star IV, Volume One (even if you don’t think you’ve heard a Coheed track, you’d almost definitely recognize lead single “Welcome Home”). Given their genre-bending sound, the group have found crossover success from various musical communities, sharing the stage with pop punk groups, hardcore acts, and mainstream metal bands. Though originally lumped in more with the punk scene, they’ve proven to have much broader commercial appeal and staying power, now with nine LPs, three live albums, and endless high-profile tours to their their name. For most of their run, they’ve served as a vehicle for Claudio Sanchez’s science fiction storyline, The Army Wars, and after taking a detour for a release, they return to it with new effort Vaxis – Act I: The Unheavenly Creatures.

Though they’ve gone through many phases and equally as many members over the years, Taking Back Sunday have, for nearing on a decade, been reunited and rejuvenated with their classic Tell All Your Friends era original lineup. Three new records have emerged since, and the group even managed to pay fan service with anniversary runs, while still keeping an eye on the fresh and new. More fully realized, musically liberated, and impassioned than they ever have been, Taking Back Sunday are clearly on second (or third or fourth) wind, paying respect to their roots and the scene they helped pave while allowing themselves to organically progress as artists. Whether you loved them in high school or the new alt-rock direction of efforts like 2016’s Tidal Wave drew you in, tonight’s performance is sure to have an expansive, exciting balance of material with something for everyone.

And opening things up, West coast rockers The Story So Far are a part of the current wave of pop punk revivalists; a reaction to the scene’s commodification and over-commericilization in the ’00s, which resulted in a decline in mainstream interest while indie-level punk has managed to flourish. The group’s self-titled third album, which dropped in 2015 (meaning they’re due for a followup), takes a mature, broader rock influence, retaining the punk spirit, lyrical bite, and pop sensibilities of their earlier efforts. No strangers to Music City, the band are a live powerhouse, and are doing their part in saving pop punk. This is so much awesome for one bill, so grab tickets while you can, and be sure to RSVP to Nashville Is The Reason’s FREE VIP after party too while you’re at it!

Coheed and Cambria, Taking Back Sunday, and The Story So Far will perform tonight, July 11 at Ascend Amphitheater. The show is all ages, begins at 6:30 p.m., and tickets are available to purchase for $29.50-39.50.