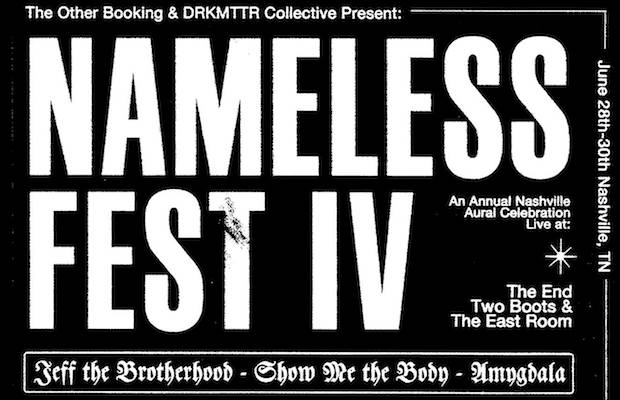 Returning for a fourth year, DIY, punk-geared, underground affair Nameless Fest IV is set to run Thursday, June 28 to Saturday, June 30, with more than 20 local and national performers across four showcases at three venues, The End, The East Room, and Two Boots. Featuring JEFF the Brotherhood, Show Me the Body, Amygdala, Shell of a Shell, Bleary, Waxed, and tons more, individual tickets are available for the Thursday and Friday night shows at The East Room each for $10, and for Saturday’s finale at The End, all three of which are 18+, for $15. Additionally, an all ages Saturday daytime showcase at Two Boots is just $5, and weekend passes that’ll get you into everything are available for $35, with all ticket options on sale here.

With a mission statement that reads “Nameless Fest exists in the space under the typical monotony that is the music industry by encapsulating and celebrating the people who are shunned from the mainstream of pop culture. We strive to raise the voices of those who the status quo tries to silence by representing the vastness and eclectic underground scene that Nashville has cultivated. To those who have felt they have no voice, to the women, POC, LGBTQ+ and all who try to carve their place in this world: this fest is for you,” Nameless Fest encapsulates the spirit of the DIY scene, and we’re thrilled to once again see such a stacked and exciting crop of performers.

In addition to so much great music, which leans punk and hardcore with a dash of indie, post-punk, experimental, and shoegaze on Thursday, Friday, and Saturday afternoon, and more indie, experimental, garage, and punk Saturday night, some plant-based local snacks will be available at the Thursday and Friday shows at The East Room, and local venders No Sabes, Reed Cavanagh, Kate Madeira, Chelsea Velaga, Abbye Law, and Walter Million will all be set up at the Saturday day showcase at Two Boots. Anything else you need to know, you can find right here, and the lineup and details for Saturday evening’s secret after show, hosted by TRAM Planet Records, are available here. Finally, get to know all of the performers with our full lineup preview below!