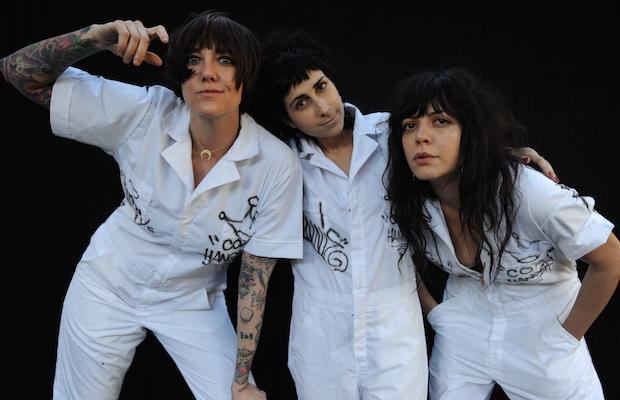 Garage punks The Coathangers sprung out of Atlanta’s DIY scene more than a decade ago, initially aspiring simply to have fun and play a few house shows, before a relentless tour schedule and five fantastic LPs managed to transform them into one of punk’s most vital indie acts. The trio have toured with the likes of the Refused and Black Lips, appeared on Last Call with Carson Daly, and have amassed plenty of critical acclaim and punk cred, heralded especially for their live show, which is prominently showcased on new effort The Coathangers Live. Tonight, June 16, you can see what they’re all about in person, as the group are slated to headline The Basement, along with perfectly-suited local openers Thelma and the Sleaze.

We’ve been raving about the wacky, trashy antics and immensely fun and kickass live performance of local grungy, alt rock outfit Thelma and the Sleaze for years, so anytime you can see them live, whether it’s somewhere you never expected to see a band like a McDonald’s or laundromat, or somewhere more conventional like this, we’ll always recommend them. Two years in the making, the band finally released their debut album, Somebody’s Doin Somethin, last year, following a couple of killer EPs, hundreds of tour dates, lineup changes (frontwoman Lauren Gilbert remains the constant), near-breakups, and even a recent award-winning documentary chronicling a month-long intracity tour. Two bombastic and unpredictable live groups in one intimate space? Grab tickets while they last!