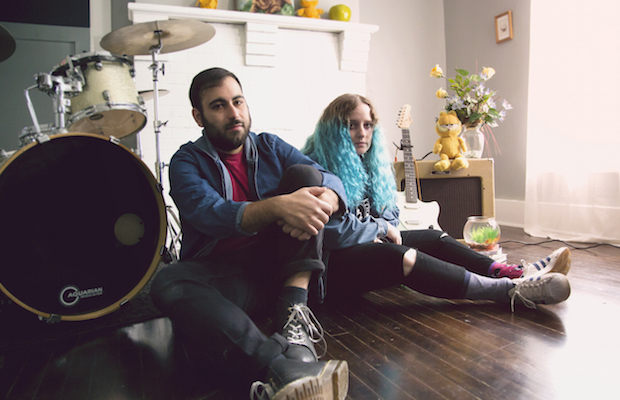 We’ve been obsessing over local duo Sad Baxter for years now, who, with their grungy riffs, pop accessibility, and personal and melancholy themes craft typically sad, sarcastic songs which are delightfully juxtaposed with singalong worthy hooks, making them an essential rising act in Nashville’s flourishing underground rock scene. Their debut LP, Weirdy, arrived in 2016, and since then the group have only managed to generate more and more buzz, touring the country and honing their fun, engaging live show.

Following a handful of singles released over the last year, the band, made up of Deezy Violet and Alex Mojaverian, are prepping to debut a highly-anticipated new EP, So Happy, July 20 through Cold Lunch Recordings. In support, Sad Baxter recently took part in a brand new live video and recording series, 615 Sessions, hosted by local indie distribution company MGM (Metropolitan Groove Merchants) and tracked at Prime Recording.

The 615 Sessions series will feature both local and touring artists, performing one of their own songs as well as a cover of another artist’s track they love, released both in video and audio format. For Sad Baxter’s installment, they opted to play “Love Yew,” the lead single from their upcoming release, which has been attracting positive attention throughout the blogosphere since dropping earlier this month, and to tackle Nirvana classic “On a Plain,” which perfectly conforms to their own grunge pop and alternative sensibilities.

We’re thrilled to premiere both videos from the session for you below! The audio versions are live as well, here and here, and you can subscribe on YouTube to keep up with future sessions. And, of course, look out for more new music from Sad Baxter, leading up to So Happy‘s release this summer!