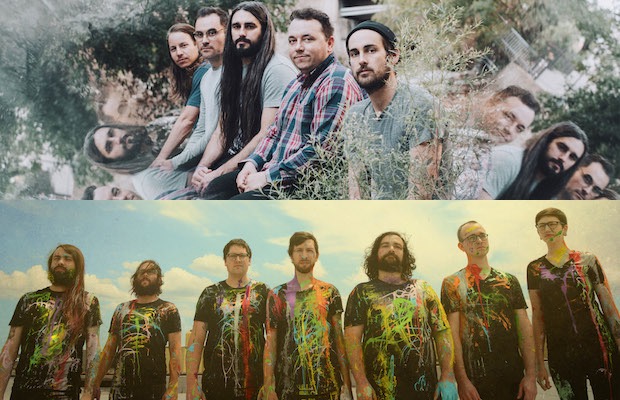 Last week was rich with shows (several in a single night, on a few occasions) for fans of emo, indie punk, post-hardcore, and post-rock, and while that trend mostly slows down this week, we’ve got one last Monday outing that feels like the perfect cap off. On a co-headling bill, Baltimore screamo turned post-rock outfit Pianos Become the Teeth, celebrating their excellent new LP Wait for Love, and emo/indie scene faves The World Is a Beautiful Place & I Am No Longer Afraid to Die will return to town to headline Exit/In tonight, May 14 with indie pop up and comers Queen of Jeans. Chances are, if you’re familiar with these bands, you grabbed your ticket months ago, but if not, allow us to do a little extra convincing…

Formed just over a decade ago in Baltimore, Pianos Become the Teeth originally emerged from the same post-hardcore and screamo cloth as peers like Touche Amore, Balance and Composure, and La Dispute. After two full-lengths, which helped make them one of the most buzzworthy new acts in the punk scene, landing high-profile tours and indie acclaim, the group took a stylistic turn with 2014 third LP, Keep You, veering in more of a layered, ambient, post-rock direction, still packed with a raw and urgent earnestness, but certainly with a less aggressive bent. Recent Will Yip followup Wait for Love largely continues in this mature evolution, though not without reconciling some of the band’s more intense musical past, landing as perhaps their most focused and exemplary record to date, and one that should please fans of era phase of the band’s existence.

Though they sprung up out of the same scene just a few years later, and certainly harbor touches of post-hardcore influence, The World Is a Beautiful Place & I Am No Longer Afraid to Die have always veered more towards the emo, indie, and post-rock, making them darlings of the discerning critical music press from practically the start, and especially finding widespread acclaim and a cult following for 2015 sophomore LP Harmlessness. With a personal, resonant, and confessional style that channels some of the best of emo’s golden age without falling into the trappings of a straight up throwback, the Connecticut based band managed to craft their best record to date with last year’s masterful Always Foreign, and, like Pianos, they’ve got many years and hundreds of shows under their belt to inform a captivating and engaging live show.

And opening things up, Philly’s Queen of Jeans play a sort of breezy, indie pop that has somehow fallen into favor with fans of the emo and punk crowd, landing them tours in recent years with the likes of Balance and Composure and Citizen. With roots in the harmony-laden girl groups of the ’60s, fused with ’90s indie and alt rock, and modern indie pop, the band released a promising self-titled debut EP in 2016, and recently followed it up with stellar new effort Dig Yourself. It seems like we always say this, but you really want to be there on time for the opener- and don’t forget to grab a ticket early to secure your spot!

Tags: Nashville Music BlogPianos Become The TeethQueen of JeansThe World Is A Beautiful Place & I Am No Longer Afraid To Die