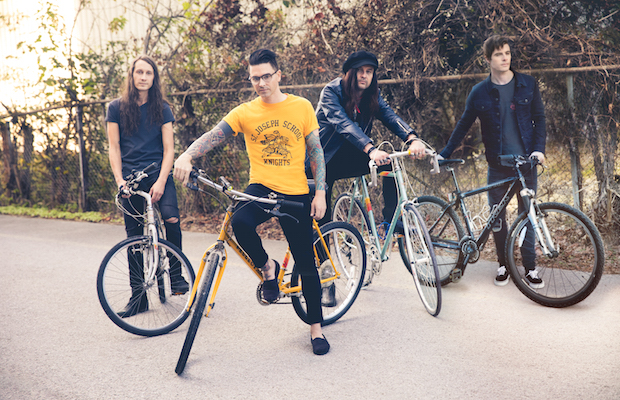 Just over a year ago, now-local emo trailblazers Dashboard Confessional played a sold-out, very special five night residency at The Basement East (along with a surprise acoustic show at The Basement), featuring support from an exciting crop of up and coming local bands, before returning later in the summer for a bigger, more conventional Ascend Amphitheater outing. Since then, the reunited group have finally released their long-gestating seventh album and first in almost a decade, Crooked Shadows, through new label home Fueled By Ramen, to renewed acclaim.

Now past the nostalgia and novelty of their return, and squarely in a forward-focused new chapter, the Chris Carrabba led group are playing their first Music City show of the new year tonight, May 11 at The Ryman– a space they haven’t played in over a decade, and one that couldn’t be more perfectly suited for the band’s earnest, and, well, confessional, fusion of emo and alt rock. Tickets are still here, with some pretty excellent seats left as of writing, at some pretty reasonable prices, and with Noah Gundersen and Amy Shark tapped to support, it promises to be an exceptional night of unrivaled songwriters.

Gunderson, as we’ve mentioned many times in the past, is a Seattle indie folk singer-songwriter with a gorgeous, nuanced, and phenomenal catalogue of personal releases, which has helped him rise the ranks to become one of the most celebrated young songwriters of his generation. Austrian indie popster Shark, too, is a talent you should be watching closely, who rose to widespread acclaim with her stellar 2016 single “Adore,” and will release her first full-length later this year. Neither opener sprung from the punk scene like Dashboard, but if you dig talented, singular, emotionally effective songwriters, they’ll be right up your alley.

Dashboard Confessional, Noah Gundersen, and Amy Shark will perform tonight, May 11 at The Ryman Auditorium. The show is all ages, begins at 7:30 p.m., and tickets are available to purchase for $33.60-43.60.